This set of Biology Multiple Choice Questions & Answers (MCQs) focuses on “The Genetic Material is DNA”.

1. What are the viruses that affect bacteria known as?
a) Virophage
b) Bacteriophage
c) Mimivirus
d) Virology
View Answer

Answer: b
Explanation: The viruses that affect bacteria are known as bacteriophage. They have the capability to both enter the bacterium and reproduce inside them. Alfred Hershey and Martha Chase worked with these kinds of viruses.

Answer: d
Explanation: Alfred Hershey and Martha Chase in the year of 1952 proved that DNA was the genetic material through experiments. They worked with bacteriophages. Oswald Avery and Maclyn McCarty helping in the determination of the biochemical natures from Griffith’s experiment with regards to the “transforming principle”.

3. The bacteria treats the attached viral particle’s (bacteriophage) genetic material as its own.
a) True
b) False
View Answer

5. When the viruses are cultivated in the medium containing radioactive Sulphur, then these viruses possess radioactive DNA but not radioactive protein.
a) True
b) False
View Answer

Answer: b
Explanation: DNA doesn’t contain Sulphur whereas protein does. So, when the virus is placed in the culture medium containing radioactive Sulphur, radioactive protein is produced and not the radioactive DNA. This is due to the presence of Sulphur in proteins.

6. The virus infected bacterium which contains radioactive proteins are not radioactive.
a) True
b) False
View Answer

Answer: a
Explanation: The virus infected bacterium which contains the radioactive DNA, were observed to be radioactive in lab experiments. But this was not the case for the ones that had the radioactive protein in them. From this, it could be inferred that the protein molecules did not enter the bacterium but only DNA molecules did. The genetic material that is passed on from the virus to bacterium is the DNA.

7. Which of the following is not a stage in the “Hershey-Chase experiment”?
a) Blending
b) Centrifugation
c) Infection
d) Conjugation
View Answer

8. Which stage is depicted in the picture given below from the “Hershey-Chase experiment”?

9. What will happen when the radioactive DNA is injected into the bacterium? 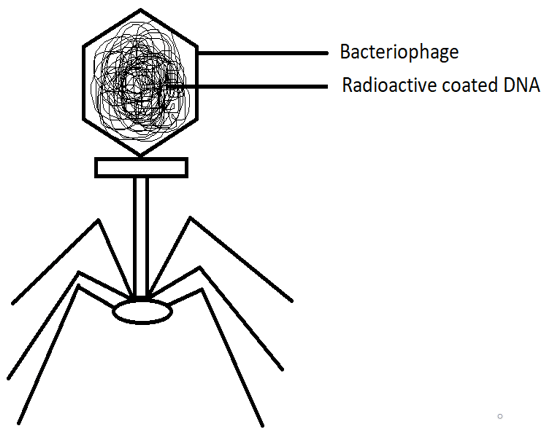 Answer: b
Explanation: When the radioactive coated DNA (genetic component) is injected into a bacterium. Radioactive DNA components can be seen after the three stages such as:
• Infection
• Blending
• Centrifugation
This is observed because DNA is the component that is being transferred from the virus to the bacterium and not the protein.

Answer: a
Explanation: The virus attaches itself to the bacterium having a radioactive protein capsule. The transfer of DNA alone occurs between the virus and bacteria. The protein capsule or any of its parts is not involved in the process. So, radioactivity can be observed in the supernatant after the centrifugation stage.