This set of Biology Problems focuses on “Origin and Evolution of Man – 6”.

1. It was believed that modern man evolved in Africa.
a) True
b) False
View Answer

Answer: a
Explanation: It is true that modern man evolved in Africa. Later its members migrated to eastwards, westwards and southwards. Modern man originated and evolved ten thousand years ago.

Answer: a
Explanation: Modern man was the first species to start agriculture. It originated ten thousand years ago when agriculture first started. It was known as the Bronze age.

3. Age of tools of stones and bones were known as ______
a) Mesozoic
b) Palaeolithic
c) Azoic
d) Mesolithic
View Answer

Answer: b
Explanation: Palaeolithic is known as the age of tools of stones and bones. Mesozoic and azoic belongs to era of geological time scale. Mesolithic is the age of animal husbandry, language, reading, and writing.

4. Which does not belong to Bronze age?
a) Age of agriculture
b) Age of knowledge
c) Age of using clothes
d) Age of sleeping
View Answer

Answer: d
Explanation: Bronze age is the age of agriculture, knowledge, and use of clothes. It does not include the age of sleeping. Bronze age belongs to Neolithic classification.

Answer: b
Explanation: The present age is known as the Iron age. It also belongs to Neolithic classification. It is the time when human civilization went vast and advanced.

Answer: c
Explanation: There was another species named as Homo sapiens futuralis. They were known as “Man of future”. The name was given by Dr. Shapiro.

7. Which of the following is the correct character of “Man of future”?
a) Shorter and haired body
b) Tomb like head
c) Short brain
d) They had a fifth finger
View Answer

Answer: b
Explanation: “Man of future” is expected to have a tall and hairless body. They had tomb-like head and a larger brain. They had no fifth finger.

8. What is known as the study of the evolutionary history of man?
a) Anthropology
b) Ethology
c) Cytology
d) Humanology
View Answer

9. Which was the only ape that was found in India?
a) Gibbon
b) Gorilla
c) Orangutan
d) Chimpanzee
View Answer

Answer: a
Explanation: Hylobates hoolock also known as Gibbon is the only ape found in India. It as found in the forests of Assam. The gibbon belonged to the family Hyalobatideae. They mostly lived on trees and fed on leaves.

10. Which of the following does not belong to the races of human?
a) Caucasoid
b) Negroid
c) Mongoloid
d) Chinaloid
View Answer

Answer: d
Explanation: Human races were classified into four. They are mainly: Caucasoid, Negroid, Mongoloid, and Australoid. Each race represented each group of people that belong to certain regions of the world.

11. The following figure shows a particular stage of the man known as _______ 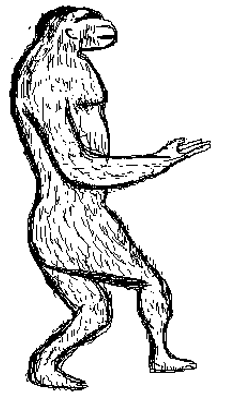 Answer: a
Explanation: The given figure represents a stage of human evolution known as Australopithecus. They evolved around 3-2 million years ago and lived in East African grasslands. They had the skull of a baby and were the first man to stand erect.

To practice all areas of Biology Problems, here is complete set of 1000+ Multiple Choice Questions and Answers.