This set of Biology Quiz for Schools focuses on “Human Health and Disease – Drugs and Alcohol Abuse-7”.

1. Which of the following is the most commonly consumed and abused intoxicant?
a) Alcohol
b) Amphetamine
c) Morphine
d) Tobacco
View Answer

Answer: a
Explanation: Alcohol or ethyl alcohol is the most commonly consumed and abused intoxicant. It is obtained through fermentation of various food articles and some fungi. Addiction to alcohol is called alcoholism or alcohol dependence.

2. Which of the following is generally not the reason of developing drinking habit?
a) Relief from pain
b) Unhappy family life
c) Success
d) Pleasure or excitement
View Answer

Answer: c
Explanation: The reasons for developing a drinking habit generally are for a feeling of independence, overcoming frustration due to failure or loss, unhappy family life, curiosity, group pressure, pleasure or excitement, relief from pain, etc.

4. Alcohol mostly acts as a stimulant.
a) True
b) False
View Answer

Answer: b
Explanation: Alcohol is not a stimulant. Rather it dulls senses and acts as a depressant of almost all body functions. However, it also removes inhibitions and learned behaviour. As a result, after drinking alcohol, people generally have a tendency to show uncivilised behaviour.

5. Which of the following is not an ill effect of drinking alcohol?
a) Gastric disorders
b) Neuritis
c) Free state of mind
d) Sexual dysfunctioning
View Answer

6. Which of the following is a serious complication from alcohol consumption that is ultimately fatal?
a) Hepatitis
b) Cholestasis
c) Fatty liver syndrome
d) Liver Cirrhosis
View Answer

Answer: d
Explanation: A part of alcohol is changed to acetaldehyde which stimulates the formation of fats which gets deposited over the walls of arteries and in the cells of the liver. With the accumulation of fat, the liver cells fail to produce proteins and enzymes. There is a little regulation of fat, protein and carbohydrate metabolism. The disorder is called fatty live syndrome. Liver later turns into a fibrous organ. This process is called Liver cirrhosis.

7. Which of the following is not a social effect of drinking alcohol?
a) Absenteeism
b) Amnesia
c) Antisocial behaviour
d) Neglect of family
View Answer

Answer: b
Explanation: The social effects of drinking alcohol include Antisocial behaviour, Absenteeism which leads to loss of interest in work, an alcoholic becomes self-centred and starts to neglect his own family. Also, continued use of alcohol leads to decreased mental functions which his called amnesia.

8. Which of the following is not a common measure for de-addiction from alcohol?
a) Psychotherapy
b) Thiamine rich diet
c) Giving other drugs
d) Disulfiram
View Answer

Answer: c
Explanation: For de-addiction, psychotherapy or counselling is very important. The patient should be provided with thiamine rich diet and brain depressants like benzodiazepines. Patients are also given disulfiram or carbimide.

Answer: b
Explanation: Tobacco is dried and cured leaves of young branches of Nicotiana tabacum. The leaves are large, broad, ovate to lanceolate in outline. They are picked up, dried and cured to yield tobacco.

10. Which of the following is not a common method of tobacco consumption?
a) Smoking
b) Chewing
c) Snuffing
d) Injecting
View Answer

Answer: d
Explanation: Tobacco is consumed through smoking, chewing and snuffing. Chewing is done with betel leaves, as paan masala or gutka. Snuff is fine tobacco powder which is inhaled for direct dissolution in the mucous membrane of the nasal tract. Smoking is the most common form of tobacco use.

11. Which is the habit-forming ingredient of tobacco?
a) Nicotine
b) Tar
c) Catechol
d) Phenol
View Answer

Answer: a
Explanation: Habit-forming active ingredient of tobacco is nicotine. It is synthesised in the roots but accumulates in the leaves. Nicotine content of tobacco leaf is 0.5-8%. A cigarette contains 6-11 mg of nicotine, out of which 1-3 mg is inhaled. 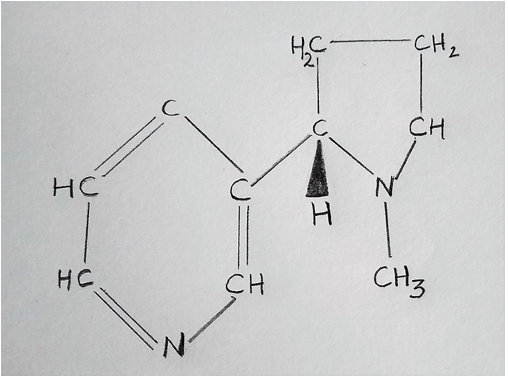 Answer: a
Explanation: The given diagram represents the structure of Nicotine. Nicotine is a colourless or yellowish oily liquid alkaloid. Nicotine is the habit-forming constituent of tobacco. It is also used as an insecticide because in higher concentration it causes paralysis of skeletal muscles.

13. Passive smokers inhale only 10% of the smoke.
a) False
b) True
View Answer

Answer: b
Explanation: World No Tobacco Day is celebrated on 31st May. Tobacco and its smoke contain a large number of ciliotoxins, irritants, carcinogens and tumour stimulants. Smoking and other forms of tobacco addictions reduce life span and bring about early death.

15. Which of the following is not a harmful effect of consuming tobacco?
a) Bronchitis
b) Stains and smell
c) Pleasure
d) Emphysema
View Answer

To practice Biology Quiz for Schools, here is complete set of 1000+ Multiple Choice Questions and Answers.