This set of Biology Multiple Choice Questions & Answers (MCQs) focuses on “Origin and Evolution of Man – 4”.

Answer: a
Explanation: Homo habilis was also known as tool maker or handy man. It was the first man who made tools of stones for hunting animals. They lived in caves.

Answer: c
Explanation: They had a cranial capacity of 650-800 c.c. They were the first human being like and had complete erect posture similar to them. They had the knowledge to create tools of stones to hunt.

3. Which of the following is not among the characters of Homo habilis?
a) Their fossils were discovered by Dr. Leakey
b) They were found in 2 million years old rocks in Africa
c) Chin was absent
d) The dental formula was different from man
View Answer

4. Who was known as the direct ancestors of homo sapiens?
a) Homo erectus
b) Homo erectus
c) Ramapithecus
d) Dryopithecus
View Answer

Answer: a
Explanation: Homo erectus were known as the direct ancestors of humans. It had many similarities to modern man. Their face, skull structure, and posture were the same.

5. Which of the following does not belong to Homo erectus?
a) Java man
b) Peking man
c) Heidelberg man
d) Cromagnon man
View Answer

Answer: a
Explanation: Homo erectus erectus, also known as Java man used fire for hunting, protection, and cooking. It had complete erect posture and lived in caves. It used tools of bones and stones.

7. Which is the correct statement among the following?
a) Cranial capacity was 500-800 c.c.
b) Origin and evolution were 1.5-2 million years ago
c) Chin was present
d) It was known as the unerect ape man
View Answer

Answer: b
Explanation: Cranial capacity was 800-1000 c.c. Chin was present and the jaw was prognathous. It was also known as an erect ape-man because of complete erect posture.

8. The figure shows the skull of which Homo erectus? 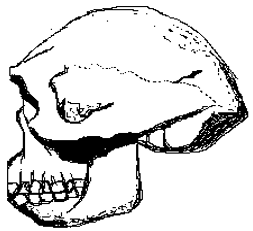 Answer: a
Explanation: The scientific name of Peking man is Homo erectus pekinensis. It was given by scientist Mayer. It also had another name called Sinanthropus erectus given by Davidson Black.

Answer: a
Explanation: Peking man used sharp chisel-shaped tools of stones and bones for cutting and killing animals. They also used fire for cooking meat and for protection. They were omnivorous. Cannibalism was also found.