2. In the ancestry line of Tyrannosaurus, which ancestor is present?
a) Crocodile
b) Triceratops
c) Archaeopteryx
d) Brachiosaurus
View Answer

Answer: a
Explanation: It is called divergent evolution and the structures are called homologous organs. Homology indicates that the animals have common ancestors. Vertebrate heart or brains is an example of homologous organs. 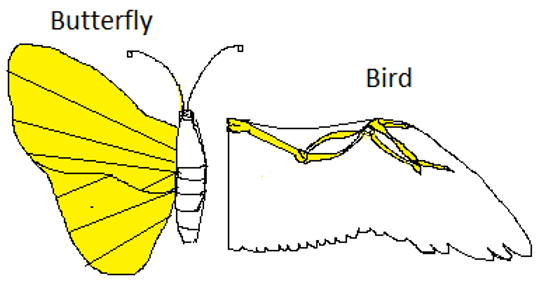 Answer: a
Explanation: The wings of butterflies and birds do not possess similarity in structure but they perform the same function, which is flying. This type of organs is called analogous organs. They follow convergent evolution.

5. Which among the following are examples of homologous organs?
a) Wings of butterfly and bird
b) Flippers of penguins and dolphins
c) Eye of octopus and mammals
d) Forelimbs of whales, bats, cheetah and humans
View Answer

Answer: d
Explanation: Forelimbs of whales, bats, cheetah and humans are homologous organs. They all have similar structure but perform different functions. The remaining options are examples of analogous organs.

Answer: b
Explanation: Fossils are paleontological evidences or remains that are useful for finding the species living their millions of years ago. Fossils only occur where animals are buried and preserved by natural process. They mainly preserved in rocks.

7. Sweet potato and radish are examples of analogous organs.
a) True
b) False
View Answer

Answer: a
Explanation: This moth was used as an example for Natural selection by Barnard. It showed that only the fittest and the one that can escape from predators will survive in nature, during the time of industrial revolution.

9. Which among the following are the characteristics of lichens?
a) They can survive in polluted areas
b) They can eat insects
c) They can indicate industrial pollution
d) They can self-pollinate
View Answer

Answer: c
Explanation: Lichens do not grow in polluted areas, and are used to indicate industrial pollution. They get destroyed in presence of Sulphur dioxide present in the polluted air. So, we can notice only green algae.

Answer: b
Explanation: Dinosaurs are extinct. Their fossils were discovered in Mongolia mainly Velociraptor and Protoceratops. It shows that dinosaurs existed years ago and are now not alive. Scientist say that they were destroyed by meteorites.

Answer: a
Explanation: Around 3.5 crore years ago, the first dinosaurs, flying reptiles originated. It was during the period Triassic. Jurassic was the golden age of dinosaurs whereas cretaceous is the period in which the dinosaurs became extinct.