1. Which of the following is not included in natural selection?
a) Stabilizing selection
b) Directional selection
c) Disruptive selection
d) Technical selection
View Answer

2. Which of the following are properties of stabilizing selection?
a) Operates in a constant environment
b) Mean value changes
c) Peak gets lower and wider
d) Favors the complex phenotype
View Answer

Answer: a
Explanation: Stabilizing selection operates in a constant environment. It favors the average or complex phenotype and eliminates the extreme values. The mean value never changes. Also, the peak gets higher and narrower.

Answer: c
Explanation: Mortality in babies is an example of stabilizing selection. It is all depended on the baby’s birth weight. The optimum birth weight is 7.3 pounds which favor this selection. Newborn infants with less than 5.5 pounds and more than 10 pounds have the highest mortality rate.

4. This diagram represents which selection? 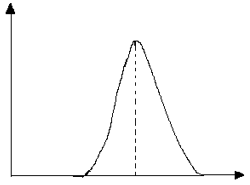 Answer: a
Explanation: This graph indicates stabilizing selection. As we can see, the peak gets higher and narrower. In this selection, most of the individuals acquire mean character value.

6. In directional selection, the peak of the graph gets higher and narrower.
a) True
b) False
View Answer

Answer: b
Explanation: It is a wrong statement. In directional selection, the peak of the graph shifts in one direction. It favors one extreme value and eliminates the other extreme and average value. Whereas in stabilizing selection, the peak gets higher and narrower.

7. Which is the correct example regarding this diagram? 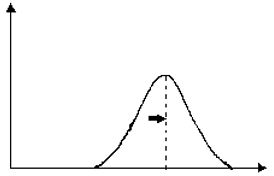 Answer: c
Explanation: The graph given belongs to directional selection as the graph shifts to one direction. The resistance of insects to DDT is an example of directional selection. A single mutation which occurred in a specific gene helped them to breakdown the toxin. It shows that it favored one extreme value.

8. What happens during disruptive selection?
a) Three peaks are formed
b) Extreme value gets rejected
c) Average value gets selected
d) Members of both extreme are selected
View Answer

Answer: d
Explanation: In disruptive selection, the members of both extreme are selected. The average gets rejected. Most of the individuals get values other than the mean character value. The naturally selected members are shown by two peaks.

9. How many peaks are there in the disruptive selection?
a) One
b) Two
c) Three
d) No peaks
View Answer

Answer: b
Explanation: In disruptive selection, most of the individuals get the periphery values at both ends of the curve given in the graph. The population gets divided into two different groups. Hence, they have two peaks which resemble a two-humped camel.

Answer: a
Explanation: Marine mollusca is also known as limpets. They are aquatic snails with a conical shaped shell with a muscular foot. They are members of the family Gastropoda. Their shell pattern shows disruptive selection.

Answer: d
Explanation: Limpets shell has a continuous pattern with color ranging from pure white to dark tan. They either attached to white gooseneck barnacles or to tan colored rocks. The light-colored limpets camouflaged with white barnacles while tanned limpets camouflaged on tan-colored rocks. But, the limpets with intermediate shell patterns were conspicuous and were preyed by predatory shorebirds.