This set of Biology Quiz for MBBS Entrance Exams focuses on “Human Health and Disease – Drugs and Alcohol Abuse-2”.

1. Which of the following is not a psychotropic drug?
a) Sedative
b) Tranquilizer
c) Hallucinogens
d) Stimulants
View Answer

Answer: c
Explanation: Hallucinogens are psychedelic or psychotogenic drugs. They have no clinical use. These are those addictive drugs about hallucinations. They have psychological dependence. On the other side, psychotropic drugs include Sedatives, Tranquilizers, Opioids and Stimulants.

2. Which of the following psychotropic drugs have the strongest physical dependence?
a) Tranquillizers
b) Sedatives
c) Narcotic Opioids
d) Stimulants
View Answer

3. Which of the following is not a symptom of Drug Addiction?
a) Loss of Blood
b) Unpredictive mood changes
c) Unprovoked violence
d) Anxiety and Depression
View Answer

Answer: a
Explanation: Symptoms of Drug Addiction differ from drug to drug or amount consumed, route of administration, rapidity of consumption and susceptibility of the individuals. The important general instructions include Unpredicted mood changes, Unprovoked violence, Irritation, Loss of interest in studies or work, Poor memory and concentration.

4. Which of the following is not an example of a sedative?
a) Barbiturates
b) Furazepam
c) Echinamate
d) Benzodiazepines
View Answer

Answer: b
Explanation: Barbiturates are the derivatives of Barbituric acid, a chemical formed from urea and malonic acid. They induce hepatic microsomal enzyme activity and affect the metabolism of other medications.

6. Which of the following drugs is used in sleeping pills?
a) Morphine
b) Benzodiazepines
c) Amphetamines
d) Barbiturates
View Answer

Answer: d
Explanation: Barbiturates are used in sleeping pills because they bind to GABA receptors of the nervous system and keep the chloride channels open for a longer period. This depresses activity of excitable cells and induces sleep.

7. Which of the following drugs are used as Antidepressants?
a) Stimulants
b) Tranquilisers
c) Amphetamines
d) Morphine
View Answer

Answer: b
Explanation: Tranquilisers are drugs with calming and soothing effect. They are medically used as antidepressants. They bring about relaxation of muscles, block reflexes, increase frequency of opening of chloride channels and reduce excitability of cells.

8. Which of the following is not an example of Benzodiazepines?
a) Furazepam
b) Diazepam
c) Lorazepam
d) Nitrazepam
View Answer

Answer: a
Explanation: Furazepam is an example of a sedative. Benzodiazepines are anti-anxiety drugs that reduce mental tension and fatigue without inducing sleep. It includes Diazepam, chlordiazepoxide, Lorazepam, Nitrazepam and Alprazolam.

9. Which of the following tranquiliser is used as an antianxiety drug as well as an antihypertension drug?
a) Chlordiazepoxide
b) Nitrazepam
c) Reserpine
d) Alprazolam
View Answer

Answer: c
Explanation: Reserpine is used as an antianxiety as well as antihypertension drug. It is an alkaloid which is obtained from Rauwolfia serpentina. It is known to precipitate suicidal tendency, mental depression and epileptic convulsions.

10. Opioids depress brain activity and produce a feeling of calmness, relaxation and drowsiness.
a) True
b) False
View Answer

Answer: b
Explanation: Opioids have narcotic, analgesic and sedative effects. It is useful in treating diarrhoea, vomiting and as soothing agent in cough syrups.

11. Which of the following drugs come under the category of Tranquillo-sedatives?
a) Furazepam
b) Echinamate
c) Amphetamine
d) Diazepam
View Answer

Answer: d
Explanation: Those drugs which have both sedative and tranquiliser properties are known as Tranquillo-sedatives. For example, Diazepam which includes Valium and Calmpose. Drug abuse leads to behaviour changes, non-coordination of body movements, impairment of memory and sexual functions.

Answer: a
Explanation: Opium is obtained from dried latex of poppy plant, Papaver somniferum. It is taken orally or smoked. Opium contains a number of alkaloids like morphine, codeine, papaverine, thebaine, etc.

Answer: a
Explanation: Opioids are drugs which bind to specific opioid receptors present in our central nervous system and gastrointestinal tract. Opioids are widely used to numb pain, relieve spasm, reduce anxiety and cause drowsiness. They are, however, addictive.

14. Opioids include Semisynthetic drugs and Synthetic opioids.
a) True
b) False
View Answer 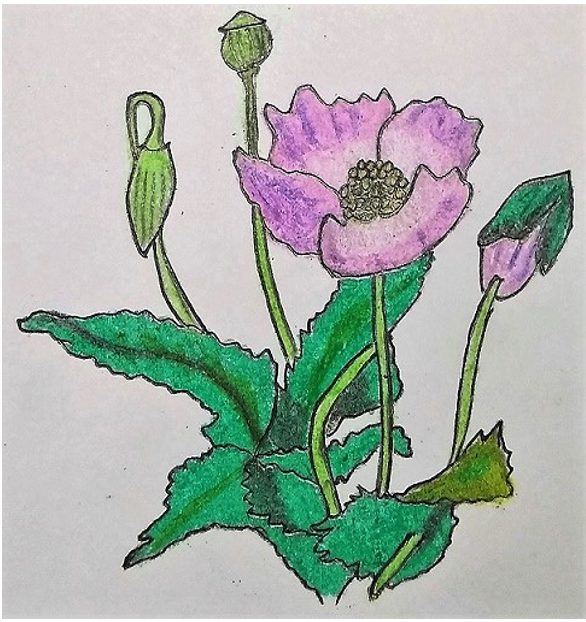 Answer: a
Explanation: The given diagram represents the Opium Poppy plant. Opium is dried latex of unripe capsules of White poppy, Papaver somniferum. Drugs obtained from this plant are useful in curing certain diseases but they are addictive in nature.