1. What is the period from birth to natural death of an organism known as?
a) Life span
b) Senescence
c) Age
d) Life cycle
View Answer

Answer: a
Explanation: The period from birth to natural death of an organism is known as its life span. It varies from few years to thousand years, depending on the organism.

2. Reproduction is defined as a biological process of organisms giving rise to young ones or offspring.
a) True
b) False
View Answer

3. What is the term used to describe genetic and morphologic similarities between different individuals?
a) Offspring
b) Clone
c) Gamete
d) Cell
View Answer

Answer: b
Explanation: Clones are organisms with the same genetic and morphological similarities. It can be carried out naturally and artificially. Asexual reproduction is an example of natural cloning. Artificial cloning is carried out in labs. In biotechnology cloning can refer to DNA fragments or cell copies.

4. What type of reproduction does the image depict? 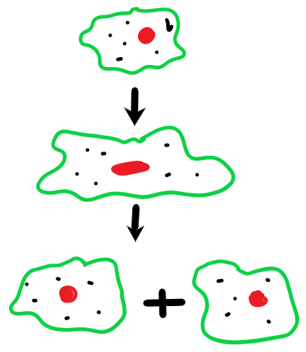 5. Which plant is the “terror of Bengal”?
a) Cereus
b) Corpse plant
c) Water hyacinth
d) Cactus
View Answer

Answer: c
Explanation: Water hyacinth is a water weed that grows on still water. It drains out all the oxygen from the water bodies which is extremely fatal for the marine organisms. It is very difficult to get rid of them because even if leaves behind a single bud, it will start multiplying at a great speed.

6. From where do rhizomes arise?
a) Roots
b) Leaves
c) Buds
d) Nodes
View Answer

Answer: d
Explanation: The site of origin in rhizomes is from nodes present in modified stems. Examples of plants that give rise to new plantlets from nodes: potatoes (the nodes on potatoes are also called nodes) and ginger.

Answer: a
Explanation: Adventitious buds arise from the margin of the leaves in Bryophyllum. Those buds give rise to new plants that fall of when they are capable enough to grow on their own. This unique ability has been exploited by the gardeners and farmers.

9. Fusion of gametes forms a zygote.
a) False
b) True
View Answer

Answer: b
Explanation: The process of fertilization is described as the fusion of two gametes of opposite sex. This fusion forms a zygote or an egg. Its genome is a combination of DNA in 2 gametes. Th chromosome number in each is 23 (haploid). On fusion it becomes a diploid cell (23 + 23 = 46).

10. What is the period of growth known as in plants?
a) Senescence
b) Juvenile phase
c) Reproductive phase
d) Vegetative phase
View Answer