2. The DNA of the E. coli is scattered throughout the cell.
a) True
b) False
View Answer

Answer: b
Explanation: E. coli is a prokaryotic cell. Prokaryotic cells do not have a well-defined nucleus. In eukaryotes, the genetic material which is the DNA is present in the nucleus. Even though the prokaryotes lack a nuclear structure, their DNA is not scattered throughout the cell. The nuclear material in a prokaryote is called as a nucleoid. The nucleoid has the DNA inside of it. It will be circular in shape. And so, the DNA is not scattered throughout the cell.

3. What are the set of positively charged basic proteins called as?
a) Histidine
b) DNA
c) RNA
d) Histones
View Answer

Answer: d
Explanation: Histones are rich in basic amino acid (AA) residues such as lysine and arginine. These two amino acids carry a positive charge at their side chains. Due to this reason, histones are called as the set of positively charged basic proteins.

4. What are the thread-like stained structures present in the nucleus known as?
a) Chromosome
b) Chromatid
c) Chromatin
d) Chloroplast
View Answer

Answer: c
Explanation: A chromatin is a long thread-like structure which contains the nucleosome. Chromosome is a form which is achieved by the chromatin when it is undergoing cell division. In this form, both of the sister chromatids will be attached together at the centromere. Chromatids or sister chromatids are the thread like structures which are achieved when the chromosome is cut longitudinally during cell division. Chloroplast is a plastid that contains the green pigment chlorophyll.

Answer: a
Explanation: Nucleosomes are the bead-like structures which are present on a chromatin. These nucleosomes contain the DNA, which is the genetic material. Such a typical nucleosome contains nearly 200 bp.

Answer: c
Explanation: Nucleosomes are the bead-like structures which are present on the strands of chromatin. These nucleosomes are formed when the DNA combines with the histone octamer. Less than 2 DNA turns can be seen which are wound around the octameric protein (Histones).

Answer: b
Explanation: The diploid cell of a eukaryotic mammal contains 6.4 x 109 nucleotides. A single cell of such type will 30 million nucleosomes in it. Nucleosomes containing chromatin when viewed under an electron microscope appear to be like “Beads-on-string”.

Answer: d
Explanation: NHC or Non-Histone Chromosomal proteins are the collection of proteins that act in a eukaryotic nucleus. They are responsible for the processes of DNA replication, RNA synthesis, RNA processes and also nuclear processes.

Answer: a
Explanation: The double stranded helical structure of the DNA, takes a turn after every 10 base pairs which is noted to be as 3.4 nm. This is called as a pitch (distance). 0.34 nm is considered to be the distance between 2 base pairs.

11. What is the structure present inside the nucleus known as? 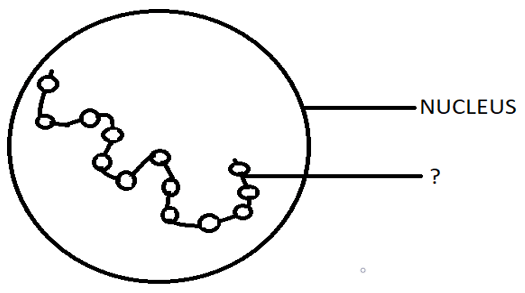 Answer: d
Explanation: The structure present inside the nucleus is known as the chromatid. The small circular structures which are present on it are called as the nucleosomes. Chromosomes are the condensed form of the chromatids. Ribosome are the components which help in the synthesis of proteins. Lysosome are the cell components which are also known are the suicidal bags of the cells.

12. The DNA helical structure is linked to which type of histone protein in the following diagram? 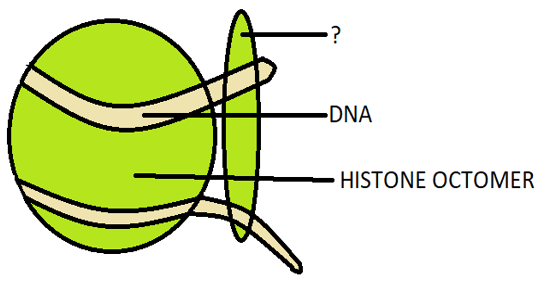 Answer: b
Explanation: H1 histones are commonly known as the linker histones. These histones can be located at the passage ways of the DNA, namely the entry and the exit sites. It is mostly found in protists and bacteria. It is also commonly known as nucleoproteins.