This set of Biology Multiple Choice Questions & Answers (MCQs) focuses on “Microbes in Production of Biogas”.

Answer: d
Explanation: Certain bacteria produce a mixture of gases such as methane, hydrogen sulphide and carbon dioxide. These gases form biogas and can be used as a source of energy as it is inflammable.

2. On which medium do certain bacteria grow to produce biogas?
a) Lignin
b) Cellulose
c) Chitin
d) Cheese
View Answer

Answer: b
Explanation: Certain bacteria which produce biogas like the methanogens particularly grow anaerobically on cellulosic material to produce large amounts of methane with carbon dioxide and hydrogen.

3. What do we collectively call the biogas producing bacteria?
a) Archaebacteria
b) Cyanobacteria
c) Eubacteria
d) Methanogens
View Answer

Answer: d
Explanation: The biogas producing bacteria are collectively known as methanogens and one such common bacterium is Methanobacterium. These bacteria are commonly found in the anaerobic sludge during the sewage treatment and also in the rumen of cattle.

4. In rumen of cattle, methanogens help in the breakdown of cellulose.
a) True
b) False
View Answer

Answer: a
Explanation: A lot of cellulosic material is present in the food of cattle. In the rumen, these bacteria help in the breakdown of cellulose and play an important role in the nutrition of cattle.

5. On which of the following factors does the type of gas produced depend?
a) Substrate
b) Cofactors
c) Catalysts
d) Product
View Answer

Answer: a
Explanation: The type of gas produced depends upon the microbes and the organic substrates they utilise. For example, in the fermentation of dough, cheese making and production of beverages, the main gas produced is CO2.

Answer: c
Explanation: The biogas plant consists of a concrete tank which is 10-15 feet deep and in which bio-wastes are collected and a slurry of dung is fed.

8. Which of the following is not true for a biogas plant?
a) The floating cover is placed over slurry
b) Biogas plant does not have an outlet
c) The slurry is removed and may be used as a fertiliser
d) The concrete tank is 10-15 feet deep
View Answer

Answer: b
Explanation: The biogas plant has a 10-15 feet deep concrete tank. A floating cover is placed over slurry which keeps on rising as the gas is produced in the tank due to the microbial activity. The biogas plant has an outlet, which is connected to a pipe to supply biogas to nearby houses. Also, the slurry can be removed and may be used as a fertiliser.

Answer: b
Explanation: Cattle dung is available in large quantities in rural areas where cattle are used for a variety of purposes. So biogas plants are more often built in rural areas. The biogas is used for cooking and lighting.

11. What is incorrectly marked in the following figure? Answer: a
Explanation: The correct labelling of the biogas plant is shown in the following figure. 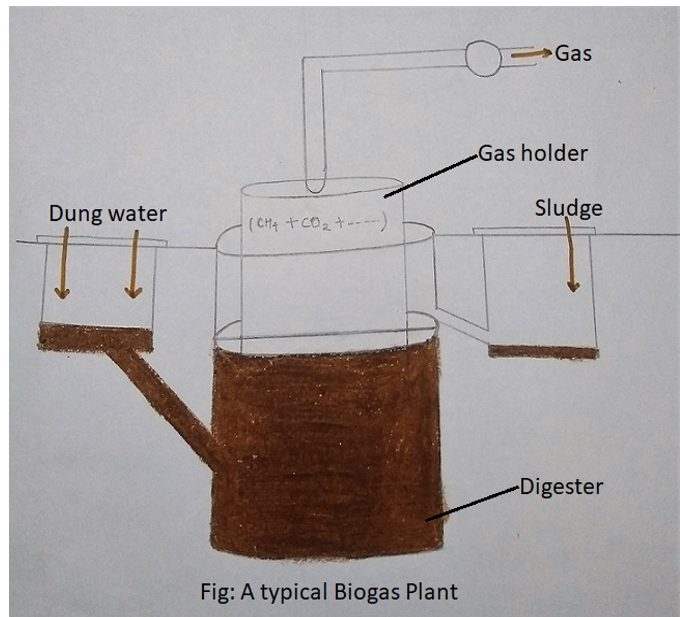