Answer: b
Explanation: NACO through its 1200 nationwide sentinel surveillance sites believe that the number of HIV infected patients in India was 2.4 million at the end of 2009, out of the total 33 million present to be worldwide. 63% of the HIV infected individuals lived in Andhra Pradesh, Tamil Nadu, Karnataka and Maharashtra.

2. Group of people with a high risk of contracting HIV infection are children below 5 years of age.
a) True
b) False
View Answer

Answer: b
Explanation: Group of people with a high risk of contracting HIV infection include prostitutes, drug addicts, homosexual males, people with extramarital relations and recipients of unscreened blood transfusions.

3. Which of the following options is wrongly labelled in the diagram? 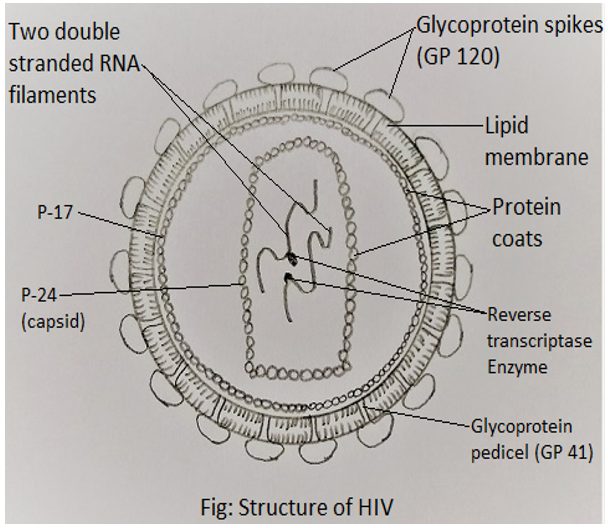 Answer: a
Explanation: The viral envelope encloses the RNA genome which is single-stranded RNA filament, segmented into two identical filaments and associated with a reverse transcriptase enzyme. The correct labelled diagram is as follows: 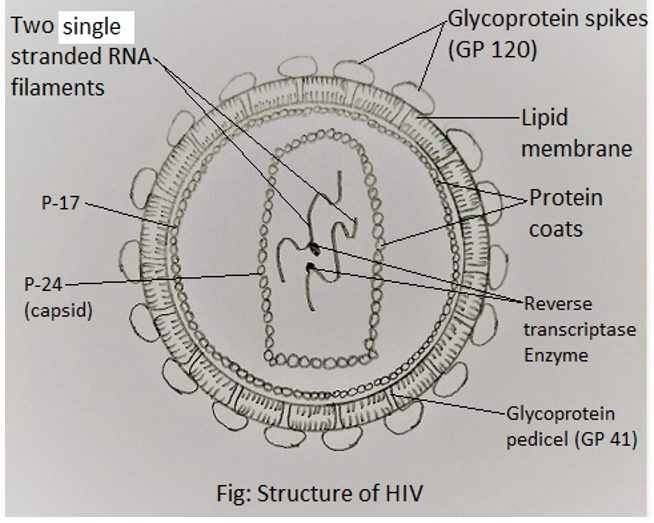 4. Which of the following is not an opportunistic serious disease contracted in HIV infected patients?
a) Kaposi’s sarcoma
b) Toxoplasmosis
c) Leukoplakia
d) Influenza
View Answer

Answer: d
Explanation: Influenza may be contacted during an HIV infection but is not a serious opportunistic disease. Opportunistic serious diseases which can be contracted in HIV infected patients are Kaposi’s sarcoma, Toxoplasmosis, Leukoplakia, Herpes virus, Cytomegalovirus etc.

Answer: a
Explanation: The normal count of Helper T-cells in human beings is 1200/mm3. If the count goes below 200/mm3 then HIV infection is suspected.

7. Which of the following techniques is not used to diagnose HIV virus?
a) PCR
b) Western Blot
c) ELISA
d) Widal test
View Answer

Answer: d
Explanation: Widal test is used to diagnose typhoid. PCR is done in the window period when there are no antibodies against the virus. It is also the fastest test to diagnose HIV infection. ELISA and Western Blot are the antigen-antibody tests.

9. Which of the following drug is used for the treatment of AIDS?
a) Azidothymidine
b) Nevirapine
c) Acetaminophen
d) Alprazolam
View Answer

Answer: a
Explanation: Azidothymidine is a nucleoside analogue used for the treatment of AIDS. It prevents the function of Reverse transcriptase and hence slows down the replication of the HIV virus. However, death is inevitable.

Answer: a
Explanation: AIDS day is celebrated on 1st December. AIDS was first reported in 1981 and in the last twenty-five years or so, it has spread all over the world killing more than 25 million people.

Answer: c
Explanation: AIDS is caused by the Human Immunodeficiency Virus(HIV), a member of a group of viruses called retrovirus, which has an envelope enclosing the RNA genome.

13. AIDS virus belongs to which of the following group of viruses?
a) Reovirus
b) Retrovirus
c) Rhinovirus
d) Ribovirus
View Answer

Answer: b
Explanation: AIDS virus belongs to a group of viruses called Retrovirus which have an envelope consisting of a lipid bilayer derived from the host cell membrane and projecting knob like glycoprotein spikes with pedicel formed of virus called glycoprotein.