Answer: a
Explanation: The full form of AMI is Antibody-Mediated Immunity. Antibodies are immunoglobulins which are produced in response to antigenic stimulation.

Answer: c
Explanation: Humoral Immunity is also called as Antibody-mediated Immunity. Our immune system comprises of the antibodies present in the body humour-blood, lymph. Antibodies protect our body from pathogens that happen to enter blood and lymph.

Answer: b
Explanation: Number of antibodies produced per day during an infection can be 20 trillion. Antibodies are immunoglobulins which are produced in response to antigenic stimulation.

4. Which structure is depicted by the following figure? Answer: c
Explanation: The above given structure is of an antibody molecule. Each antibody molecule has four peptide chains, two small called as light chains and two longer called heavy chains. Both chains are linked by disulphide bonds.

Answer: d
Explanation: Antigenic determinants are recognisable sites over antigens. Antigens are generally large molecules. The majority of them are made up of Proteins and Polysaccharides found on the cells walls of bacteria and other cells or the coat of viruses.

7. Which of the following set of antibodies are responsible for providing Natural Passive Immunity to the foetus?
a) IgD and IgE
b) IgM and IgA
c) IgA and IgE
d) IgG and IgA
View Answer

8. Which structure of the antibody is represented by the following figure? 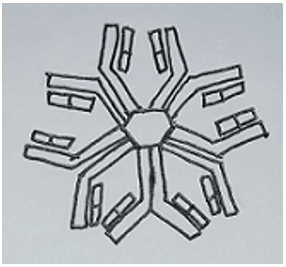 Answer: b
Explanation: The given structure represents the structure of IgM. It is present in pentameric form and has 10 paratopes (Antigen Binding Sites).

9. Which of the following is the largest antibody?
a) IgA
b) IgG
c) IgM
d) IgE
View Answer

Answer: c
Explanation: IgM is the largest antibody amongst all because it has 10 paratopes or antigen binding sites. IgG antibody is the smallest amongst all.

10. Which of the following statements is not correct regarding IgM antibody?
a) Responsible for the initial activation of B-cells
b) It is an effective agglutinator of antigen
c) It makes up 7-10% of our total antibodies
d) It is the last antibody to be released during the primary response
View Answer

Answer: d
Explanation: IgM is the first antibody which is released during an infection site. IgM is also responsible for the initial activation of B-cells, macrophages and the complement system. It also makes up 7-10% of our total antibodies.

11. Which of the following is not the function of an antibody?
a) Lysis
b) Neutralisation
c) Assimilation
d) Precipitation
View Answer

Answer: c
Explanation: Assimilation is not the function of an antibody. The functions of antibodies include Lysis, Neutralisation, Opsonisation, Precipitation and Agglutination.

Answer: a
Explanation: IgG shows Opsonisation property. It is a property of Adherence where non-palatable antigen becomes palatable which helps in the endocytosis of pathogen by the macrophages.