1. Which of the following criterion needn’t be fulfilled by the genetic material?
a) Occurrence of replication
b) Should be able to express itself in the form of “Bohr’s characters”
c) Provision of scope for the mutation that is required for evolution
d) It should be chemically and structurally stable
View Answer

Answer: b
Explanation: A genetic material must be both chemically and structurally stable. It must be able to replicate. It should provide scope for the evolutionary changes. But it should also be able to express itself in the form of “Mendelian characters” and not “Bohr’s characters”. These Mendelian characters refer to the three laws that were proposed by Gregor Mendel.

2. Which of the following is not a characteristic of RNA?
a) It has ribose sugar molecules in the nucleotides
b) It is a single stranded molecule
c) It is not stable under alkaline conditions
d) All the 3 types of RNA are involved in protein synthesis
View Answer

Answer: c
Explanation: The hydrogen atom which is attached to the hydroxyl group on the 2’- C atom of the RNA can be easily deprotonated. The presence of larger grooves in RNA is also a reason for it not being stable under alkaline conditions. But under the same condition, the DNA molecule will be stable for it has smaller grooves which cannot be easily attacked or penetrated.

3. Which of the following criterion cannot be fulfilled by protein?
a) Formation of polypeptide chains
b) Generation of its replica
c) Formation of alpha helix and beta sheets
d) Non covalent bonds are present between amino acids
View Answer

Answer: b
Explanation: Proteins form polypeptide chains by the peptide bond formation between amino acids. Their different folding statures results in the formation of non-covalent bonds as well as the different forms of proteins. Despite these capabilities, proteins lack the ability to generate their replica.

4. Stability is not a property of genetic material.
a) True
b) False
View Answer

Answer: b
Explanation: The genetic material of an organism should be stable and not change during the course of an organism or person’s lifetime. If any changes are to occur, then variations and problems will arise. It is also clearly inferred from the “transforming principle” of Griffith from his experiments revolving around the R and S strains of the bacterium that stability persists.

5. Stability of the genetic material can also be inferred from the “transforming principle”.
a) True
b) False
View Answer

Answer: a
Explanation: Heat killed the bacterium but, it didn’t destroy all of its genetic material characteristics. This was proved by Griffith in his experiments concerning about the transformation principles. From this it can be inferred that the stability of the genetic material (either DNA or RNA) cannot be entirely killed. The stability of the genetic can be seen.

Answer: d
Explanation: From the Griffith’s experiment related to the transforming principle, we could understand that the genetic material still possessed some stability. Likewise, the genetic material DNA which is present in this case also has the capability to join the 2 complementary strands despite it being heated up under appropriate conditions.

7. Which of the following statements is correct regarding DNA and RNA?
a) DNA is highly reactive
b) RNA is not catalytic
c) RNA cannot be easily degraded
d) DNA is a better genetic material than RNA
View Answer

Answer: d
Explanation: DNA is comparatively less reactive than RNA. The 2’-OH group which is present at the nucleotide of the RNA is the reactive group. This makes the RNA highly reactive in comparison to the DNA. RNA is also catalytic and liable. It cannot be easily degraded. Due to these reasons, the conclusion is that that DNA is the better genetic material than the RNA.

8. The presence of which base in the place of uracil makes the DNA more stable? 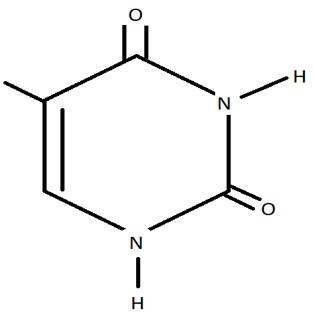 Answer: c
Explanation: In the case of DNA, thymine is found in the place of uracil. Uracil is found to make a double hydrogen bond with Adenine in RNA. The resistance showed by thymine towards all the photochemical mutations is what makes the DNA more stable.

9. At what rate does the RNA mutate as compared to DNA?
a) Faster rate
b) Slower rate
c) Moderate rate
d) Depending on the medium
View Answer

Answer: a
Explanation: Mutations can be seen in both DNA and RNA. But RNA mutates at a much faster pace in comparison to the DNA. This is due to the lack of stability that is seen in RNA. Likewise, the viruses which contain RNA as their genetic material also mutate at a faster rate. Their life span will stand short on the contrary.

10. RNA codes are used for translation into which of the following?
a) Genes
b) DNA
c) Proteins
d) Carbohydrate
View Answer

11. Which of the following is responsible for the transmission of genetic information?
a) DNA
b) RNA
c) Proteins
d) Mitochondrion
View Answer

Answer: b
Explanation: The storage of the genetic information takes place in the DNA. It carries all the necessary information needed for heredity. The stability of the DNA is more too, this helps in carrying information. During the central dogma, DNA in transcripted to RNA after which RNA will be responsible for the transmission of the genetic material.

12. Which of the following is responsible for the storage of genetic material?
a) DNA
b) RNA
c) Proteins
d) Ribosome
View Answer

Answer: a
Explanation: DNA is a stable genetic molecule in comparison to the RNA. So, the carriage of the genetic information will be carried out by the DNA. The transmission of the genetic material will be done by RNA as it is comparatively less stable.