Answer: c
Explanation: Microbes are microorganisms which have a size less than 0.1 mm. Besides macroscopic plants and animals, microbes are the major components of biological systems on this earth.

2. Microbes are only present in hot and humid areas.
a) True
b) False
View Answer

Answer: b
Explanation: Microbes occur everywhere- in soil, water, air, inside our bodies and that of other animals and plants. They are present even at sites where no other life-form could possibly exist- sites such as deep inside geysers, deep in the soil, etc.

3. Which of the following is not related to microbes?
a) Microbes are not ideal for biotechnology
b) Microbes produce chemicals during their metabolism
c) Microbes can be grown on artificial medium
d) Microbes can live in highly acidic medium
View Answer

Answer: a
Explanation: Microbes can be grown on artificial cultures media where they form colonies. During their metabolism, microbes produce chemicals, some of which are used by human beings. Microbes can live in highly acidic as well as an alkaline medium. Microbes are certainly ideal for biotechnology.

4. Which of the following is not microbe?
a) Bacteria
b) Protozoa
c) Viroids
d) Worms
View Answer

Answer: d
Explanation: Microbes are diverse in nature and include- protozoa, bacteria, fungi and microscopic animal and plant viruses, viroids and also prions that are proteinaceous infectious agents.

5. Which shape of bacteria has been represented in the following diagram? 6. Which shape of bacteria has been shown in the following diagram? Answer: b
Explanation: The following diagram represents colonies of bacteria on a petri dish. Microbes like bacteria and many fungi can be grown on nutritive media to form colonies, that can be seen with naked eyes.

8. All microbes are harmful to humankind.
a) True
b) False
View Answer

Answer: b
Explanation: Although microbes cause a large number of diseases in human beings, various animals and plants, but not all microbes are harmful. Several microbes are useful to humans in diverse ways like in household products, industrial products, agricultural products, etc.

9. In the following diagram, what does the question mark represent? Answer: b
Explanation: The question mark in the following figure represents flagella of a rod-shaped bacterium. It is 50,000X magnified image of a bacterium. Answer: a
Explanation: Adenoviruses cause respiratory infections. These are non-enveloped viruses with a double-stranded DNA genome. The following diagram shows an adenovirus: 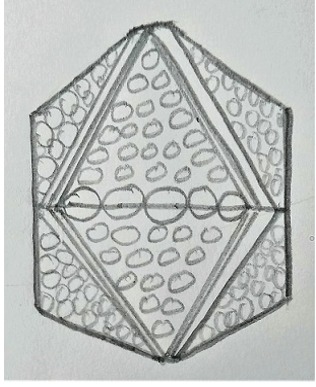