This set of Biology Multiple Choice Questions for MBBS Entrance Exams focuses on “Origin and Evolution of Man – 2”.

1. Which of the following is not among the types of apes?
a) Chimpanzee
b) Monkey
c) Gorilla
d) Orangutan
View Answer

2. Which ape is closely related to the man?
a) Orangutan
b) Gorilla
c) Gibbon
d) Chimpanzee
View Answer

Answer: d
Explanation: Chimpanzee is closely related to man. DNA content and DNA matching are the same in both. This similarity is more than 99% with chimpanzee whereas 94% with a gibbon.

3. According to organic evolution, which ape is closely related to the man?
a) Monkey
b) Gorilla
c) Orangutan
d) Sinanthropus
View Answer

Answer: d
Explanation: Based on organic evolution, Sinanthropus is closely related to man. It was the former genus name given to some hominids, which were found in China in 1926. It was the old Peking man.

5. Which of the following is not a similarity between man and apes?
a) Tail absent
b) Erect posture
c) Smaller head, less cranial capacity
d) Grasping hands
View Answer

6. The blood group of AB series was present in both man and apes.
a) True
b) False
View Answer

Answer: a
Explanation: They shared the same blood group series i.e. they had A, B, AB, and O blood groups. This was one of the similarities between man and ape. The composition of Hb is same in both.

Answer: a
Explanation: Banding pattern on chromosome number 3 and 6 of human and chimpanzee is 100% similar. Since DNA content and matching is almost 99% with the chimpanzee. This shows that humans evolved from chimpanzees.

Answer: b
Explanation: Apes had a U-shaped jaw. They had a narrow flat nose with the downward direction of the nostril. Whereas, elephant and tree shrews had V-shaped jaw. 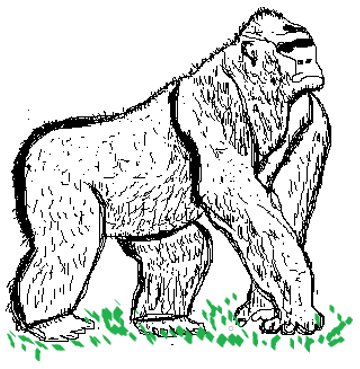 Answer: a
Explanation: The given figure shows a Gorilla. It belongs to the family pongideae of apes. They have a cranial capacity of 500 c.c. They mostly feed on plants and fruits.