This set of Biology Assessment Questions for MBBS Entrance Exams focuses on “The Search for Genetic Material”.

Answer: c
Explanation: S-strains are the virulent ones which have the ability to kill a mouse when injected into it. But, when the heat killed S-strain is injected into the mouse along with the R-strain, the mouse happens to die due to transformation. The purified bio-chemicals (protein, DNA and RNA) from the heat killed S-strain, transforms the R-strain into the S-strain (virulent).

6. Which of the following is responsible for the inhibition of transformation in organisms?
a) DNase
b) RNase
c) Protease
d) Nuclease
View Answer

Answer: a
Explanation: The presence of protease (protein digesting enzymes) and RNase (RNA digesting enzymes) in the presence of the virulent or avirulent strains will not affect the process of transformation. But on the contrary, when the DNase is present, the process of transformation will not occur. This proves that the transformation process cannot occur as long as the DNase enzyme is present. The role of nuclease is to cleave the phosphodiester bonds between the nucleotides of nucleic acids.

7. What happens when S-strain and the biomolecule (Lipid) are together, when testing the transformation with regards to the R-strain? 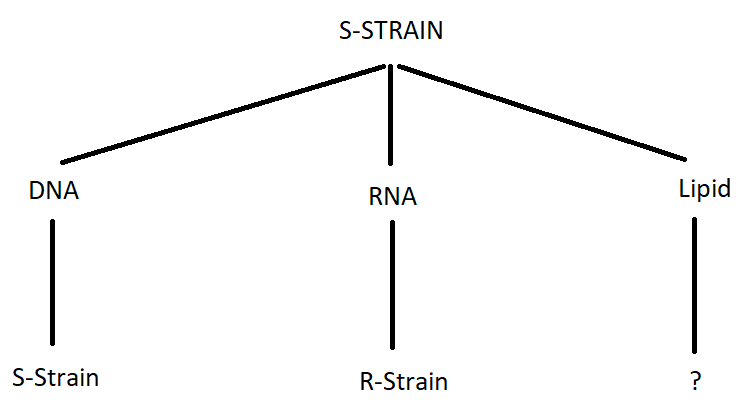 8. Which of the following is considered to be as an incorrect difference between DNA and DNase?

Answer: d
Explanation: DNA is the genetic material of an organism. It contains all the required information for heredity. DNase will not promote the DNA. It is used to cleave the phosphodiester bonds by hydrolysis. As a result of this, the DNA biomolecule is degraded.

9. What will be the state of the mouse that has been injected with the heat killed S-strain from the Staphylococcus pneumoniae?
a) Alive
b) Dead
c) On the verge of dying
d) Lives with pneumonia
View Answer

11. What will be the outcome when R-strain is injected into the mice?

Answer: d
Explanation: R-strains are the non-virulent strains. So, when they are injected into the mice, they won’t cause any damage to it. As a result, the mice will be able to live without complications. The bacteria contain both the S and R strains, but, only the R-strain is being injected in this scenario.

12. Which was considered to be as the genetic material prior to the works done by Oswald Avery, Colin MacLeod and Maclyn McCarty?
a) Nucleoids
b) Nucleons
c) Protein
d) Chromosome
View Answer