1. Amino acids have no structural specialities to read a code in a unique mode.
a) True
b) False
View Answer

Answer: a
Explanation: In the earlier days, Francis Crick felt that a mechanism has to be there to read the codes. This was because amino acids possess no structural specialities to do that. And so, he postulated that there had to be an adapter molecule.

2. Who came up with the idea of “adapter molecule”?
a) James Watson
b) Francis Crick
c) Gregor Mendel
d) Charles Darwin
View Answer

3. Which of the following is an adapter molecule?
a) mRNA
b) rRNA
c) cRNA
d) tRNA
View Answer

Answer: d
Explanation: The tRNA was known by the name sRNA in its early days. sRNA stands for soluble RNA. This was even before the postulation of the genetic code. But, the role of tRNA as an adapter was assigned much later.

4. What does the anticodon loop of the tRNA contain?
a) A site for binding the amino acids
b) Bases that are complementary to the code
c) They have UAA codons
d) They have UAG codons
View Answer

Answer: b
Explanation: The stop codons are UAA, UAG and UGA. These codons are absent in the tRNA molecules. tRNA possesses an amino acid acceptor end which is the site for binding the amino acids. Finally, the anticodon loop of the tRNA contains bases that are complementary to the codes.

5. Which of the following is the actual structure of the tRNA? 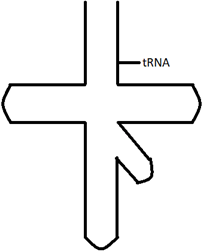