This set of Biology Quiz for AIIMS Exam focuses on “Digestion of Food-2”.

1. What is the structural and functional unit of the liver?
a) Hepatic lobules
b) Hepatic cells
c) Hepatic ducts
d) Cystic duct
View Answer

Answer: a
Explanation: The hepatic lobules are the structural and functional units of the liver containing hepatic cells arranged in the form of cords. Each lobule is covered by a thin connective tissue sheath called as Glisson’s capsule.

Answer: a
Explanation: Pancreas is a compound or heterocrine gland which consists of both endocrine and exocrine parts. Endocrine part produces the hormones like insulin and glucagon while the exocrine part is responsible for secreting pancreatic juices and enzymes.

3. Which two ducts are marked incorrectly in the given diagram? 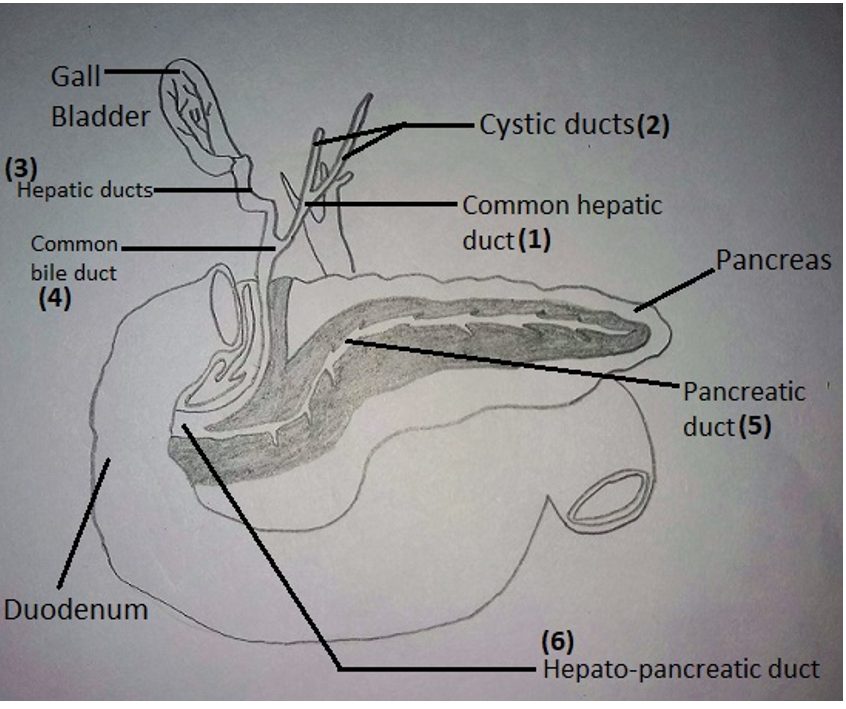 Answer: d
Explanation: The correct labelling of the diagram is given as follows: The given figure represents the duct systems of liver, gall bladder and pancreas.

4. What are the two major functions performed by the buccal cavity in digesting food?
a) Secretes mucus and bile
b) Facilitation of swallowing and mastication of food
c) Secretion of amylases and juices
d) Secretion of mucus and deglutition
View Answer

Answer: b
Explanation: The buccal cavity performs two major functions which are mastication of food and facilitation of swallowing. The teeth and the tongue with the help of saliva masticate and mix the food thoroughly.

5. What is deglutition?
a) Mastication of food
b) Secretion of saliva
c) Swallowing of food
d) Mixing of food
View Answer

Answer: c
Explanation: Deglutition refers to swallowing. Mucus in saliva helps in lubricating and adhering the masticated food particles into a bolus. The bolus is then conveyed into the pharynx and then into the oesophagus by swallowing or deglutition.

Answer: a
Explanation: In the buccal cavity, about 30% of starch is hydrolysed by salivary amylase or carbohydrate splitting enzyme which acts at a pH of 6.8 and converts starch into a disaccharide- maltose.

8. Which of the following types of cells is not present in the stomach?
a) Neck cells
b) Chief cells
c) Parietal cells
d) Paneth cells
View Answer

9. Pepsinogen is activated by which of the following secretions?
a) Trypsin
b) Salivary amylase
c) Hydrochloric acid
d) Rennin
View Answer

Answer: c
Explanation: The proenzyme pepsinogen on exposure to hydrochloric acid gets converted into the active enzyme pepsin which is the proteolytic enzyme of the stomach. Pepsin converts proteins into proteoses and peptones.

Answer: c
Explanation: The stomach stores food for 4-5 hours. The food mixes thoroughly by acidic gastric juice of the stomach by the churning movements of its muscular wall and is called chyme.

Answer: b
Explanation: Hydrochloric acid provides the acidic pH 1.8 which is optimal for the action of pepsins. The mucus and bicarbonates present in the gastric juice play an important role in the lubrication and protection of the mucosal epithelium of the stomach.

12. What is the milk digesting enzyme of infants?
a) Lipases
b) Lactose
c) Rennin
d) Pepsin
View Answer

Answer: c
Explanation: Rennin is a proteolytic enzyme found in the gastric juice of infants which helps in the digestion of milk proteins. Small amounts of lipases are also secreted by gastric glands.

13. Which layer of the alimentary canal generates various types of movements in the small intestine?
a) Mucosa
b) Sub-mucosa
c) Muscularis
d) Serosa
View Answer

Answer: c
Explanation: Various types of movements are generated by the muscularis layer of the small intestine. These movements help in the thorough mixing up of the food with various secretions in the intestine and thereby facilitate digestion.

14. Which of the following is not the secretion released into the small intestine?
a) Bile
b) Pancreatic juice
c) Salivary amylase
d) Intestinal juice
View Answer