1. Which of these is not a function of thyroid hormones?
a) Regulation of basal metabolic rate
b) Erythropoiesis
c) Maintenance of electrolyte balance
d) Regulation of diurnal cycle
View Answer

Answer: d
Explanation: Thyroid hormones are important for the regulation of basal metabolic rate. It also helps erythropoiesis and maintains water and electrolyte balance. However, the pineal gland regulates the diurnal cycle.

Answer: a
Explanation: PTH or parathyroid hormone is secreted by the parathyroid gland. It is important for regulating the blood calcium level along with thyrocalcitonin. PTH increases calcium ion absorption from digested food.

5. What is the shape of the thymus gland?
a) Spherical
b) Lobular
c) Irregular
d) Triangular
View Answer

Answer: b
Explanation: The thymus gland is lobular in shape. It is an important lymphatic organ. The thymus is situated behind the sternum and between the lungs. It secretes thymosin which is a peptide hormone.

6. Which of these statements is false about thymus?
a) Differentiation of T-lymphocytes take place here
b) It secretes thymosin
c) It is intact for persons of all ages
d) Promotes production of antibodies
View Answer

Answer: c
Explanation: Thymus is an endocrine gland situated between the lungs and behind the sternum. It secretes thymosin and the differentiation of T-lymphocytes takes place here. It promotes antibody production. However, the thymus degenerates in old individuals.

7. Where are the adrenal glands located?
a) Above the kidneys
b) Between the lungs
c) Around the trachea
d) Base of the hypothalamus
View Answer

Answer: a
Explanation: The adrenal glands are located just above the kidneys. It is pyramidal in shape. The thyroid gland is located around the trachea, the thymus is located between the lungs and the pituitary gland is located at the base of the hypothalamus.

8. Identify the structure in the given below. 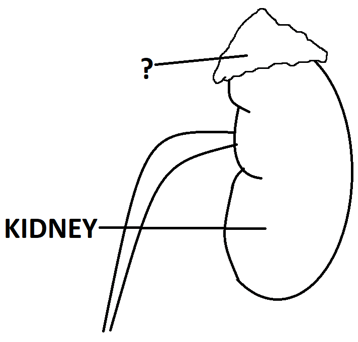 Answer: d
Explanation: The given picture shows a kidney with a pyramidal structure above it. This is the adrenal gland which is an endocrine gland. The adrenal gland is divided into two parts- the outer cortex and the inner medulla.

9. What is the disease caused by the deficiency of adrenal cortex hormones?
a) Acromegaly
b) Graves’ disease
c) Addison’s disease
d) Diabetes Insipidus
View Answer

Answer: c
Explanation: The deficiency or underproduction of hormones of the cortex of the adrenal gland leads to Addison’s disease. It is characterized by fatigue and weakness due to an alteration in carbohydrate metabolism.

Answer: a
Explanation: T-lymphocytes are produced by the thymus, which is an endocrine gland and an important organ of the lymphatic system. The differentiation of T-lymphocytes occurs here. They provide cell-mediated immunity.

12. Which of these hormones would be rapidly secreted in a man if he was being chased by a dog?
a) Somatostatin
b) Somatotropin
c) Epinephrine
d) Prolactin
View Answer

Answer: c
Explanation: Epinephrine or adrenaline is an emergency hormone that is rapidly secreted during stressful or emergency situations, such as when a man is being chased by a dog. It is secreted by the adrenal cortex.

13. Which of these is not an effect of catecholamine secretion?
a) Piloerection
b) Pupillary dilation
c) Glycogen formation
d) Increase in heart rate
View Answer

Answer: c
Explanation: Catecholamines are emergency hormones which are secreted during stressful situations by the adrenal cortex. They cause the breakdown of glycogen to glucose, which raises the blood sugar level.

14. Which of these substances does norepinephrine not stimulate the breakdown of?
a) Glucose
b) Lipids
c) Proteins
d) Glycogen
View Answer

Answer: a
Explanation: Norepinephrine is a catecholamine or an emergency hormone. It is secreted during stressful situations. Glycogen, lipids and proteins are broken down to raise the blood glucose level. It does not stimulate glucose breakdown.

15. What is the name of the outer layer of the adrenal cortex?
a) Zona reticularis
b) Zona glomerulosa
c) Zona fasciculata
d) Zona pellucida
View Answer