1. The stomach is divided into how many major portions?
a) One
b) Two
c) Three
d) Four
View Answer

Answer: d
Explanation: The stomach is divided into four major portions namely-Fundus, Cardiac, Body, and Pyloric. The given figure represents the anatomical regions of the human stomach: 2. Which of the following is incorrect regarding the shapes of the three portions of the small intestine?
a) Duodenum-C shape
b) Duodenum-J shape
c) Ileum-highly coiled
d) Jejunum-long coiled
View Answer

Answer: a
Explanation: Large intestine consists of the caecum, colon, and rectum. The ileum is a part of the small intestine which opens into the large intestine. The caecum is a blind sac which hosts some symbiotic micro-organisms.

5. The colon is divided into how many parts?
a) One
b) Three
c) Four
d) Five
View Answer

Answer: c
Explanation: Colon is divided into four parts- an ascending, a transverse, descending part, and a sigmoid colon. The descending part opens into the rectum which opens out through the anus.

6. The mucosa is the outermost layer of the alimentary canal.
a) True
b) False
View Answer

7. In which layer of the alimentary canal, goblet cells are present?
a) Serosa
b) Mucosa
c) Muscularis
d) Sub-mucosa
View Answer

Answer: b
Explanation: Mucosal epithelium has goblet cells which secrete mucus that helps in lubrication. All four layers show modifications in different parts of the alimentary canal.

8. Muscularis layer is made up of which of the following?
a) Cardiac muscles
b) Skeletal muscles
c) Smooth muscles
d) Connective tissue sheath
View Answer

Answer: c
Explanation: Muscularis layer is formed by smooth muscles which are usually arranged into an inner circular and an outer longitudinal layer. An oblique muscle layer may be present in some regions.

9. In which layer of the alimentary canal, the glands are present in duodenum?
a) Sub-mucosa
b) Muscularis
c) Mucosa
d) Serosa
View Answer

Answer: a
Explanation: In the duodenum, glands are present in the sub-mucosa. The sub-mucosal layer is formed of loose connective tissue containing nerves, blood, and lymph vessels.

10. What does the question mark represents in the given diagram? Answer: c
Explanation: The correct labelling of the given diagram is as follows: 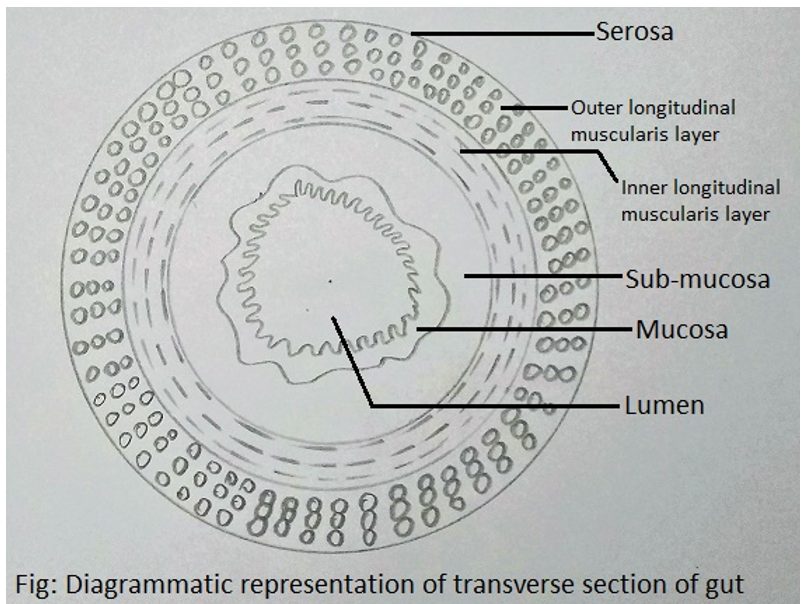 Muscularis layer is further made up Inner circular layer and outer longitudinal layer.

Answer: a
Explanation: The mucosal layer of the alimentary forms irregular folds or rugae in the stomach and small finger-like projections-villi in the small intestine. The cells lining the villi produce numerous microscopic projections called microvilli giving a brush bordered appearance.

Answer: b
Explanation: The mucosa layer of the alimentary canal forms gastric glands in the stomach and crypts in between the bases of villi in the intestine which are also known as Crypts of Lieberkuhn.

13. Which of the following is not a digestive gland?
a) Salivary gland
b) Testis
c) Liver
d) Pancreas
View Answer

Answer: b
Explanation: The digestive glands associated with the alimentary canal include the salivary glands, the liver, and the pancreas. The testis is not a digestive gland.

14. Saliva is produced by how many salivary glands?
a) Three
b) Four
c) Five
d) Six
View Answer

Answer: d
Explanation: Saliva is mainly produced by three pairs of salivary glands which are the parotids, the sub-maxillary or sub-mandibular, and the sub-lingual.

Answer: d
Explanation: The liver is the largest gland of the human body and weighs about 1.2-1.4 kg in an adult human. It is situated in the abdominal cavity, just below the diaphragm, and has two lobes.