1. How many types of circulatory pathways are present in the animal kingdom?
a) One
b) Two
c) Three
d) Four
View Answer

2. How many chambers are present in the heart of crocodiles?
a) Two
b) Three
c) Four
d) Five
View Answer

Answer: b
Explanation: In amphibians and reptiles, the left atrium receives oxygenated blood from the gills/lungs/skin and the right atrium gets deoxygenated blood from other body parts. However, they get mixed up in the single ventricle which pumps out mixed blood and is therefore known as incomplete double circulation.

5. Which of the following organisms do not show double circulation?
a) Birds
b) Mammals
c) Crocodiles
d) Reptiles
View Answer

Answer: d
Explanation: In crocodiles, birds and mammals, oxygenated and deoxygenated blood is received by the left and right atrium respectively. The ventricles pump it out without any mixing up, i.e., two separate circulatory pathways, hence these animals have double circulation.

6. The heart is an ectodermally derived organ.
a) True
b) False
View Answer

Answer: b
Explanation: Heart is derived from the innermost germ layer i.e., mesoderm. It is situated in the thoracic cavity, in between the two lungs and is slightly tilted to the left. Skin, nails, lens of the eye, the mouth are all derived from ectoderm.

7. Which of the following is not included in the human circulatory system?
a) Heart
b) Blood vessels
c) Blood
d) Skin
View Answer

Answer: d
Explanation: Human circulatory system which is also called a blood vascular system consists of a muscular chambered heart, a network of closed branching blood vessels and blood, the fluid which is circulated.

Answer: b
Explanation: Heart is protected by a double-walled membranous bag, pericardium, enclosing the pericardial fluid which acts as a shock absorber. Our heart consists of four chambers.

Answer: b
Explanation: The atrium and ventricle of the same side are separated by a thick fibrous tissue called the atrioventricular septum. However, each of these septa is provided with an opening through which the two chambers of the same sides are connected.

12. Each artery and vein consists of two layers.
a) True
b) False
View Answer

Answer: b
Explanation: Each artery and vein consists of three layers: an inner lining of squamous endothelium, a middle layer of smooth muscle and elastic fibres and an external layer of fibrous connective tissue with collagen fibres.

Answer: d
Explanation: A unique vascular connection exists between the digestive tract and the liver which is called a hepatic portal system. The hepatic portal vein carries blood from intestine to the liver before it is delivered to the systemic circulation.

14. Which of the following is not correctly marked in the given diagram? 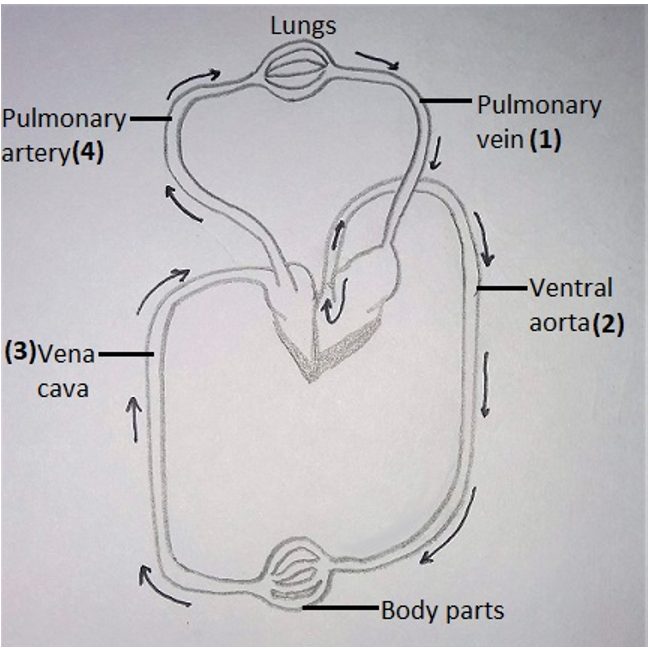 Answer: b
Explanation: The correct labelling of the given diagram is as shown: 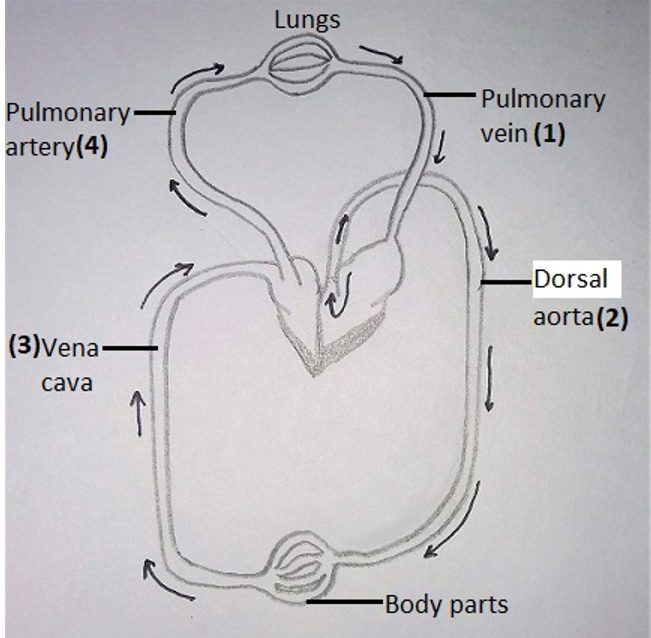 15. Which of the following regulates the normal activities of the heart?
a) CNS
b) Kidneys
c) Heart
d) Eyes
View Answer

Answer: c
Explanation: All the activities of the heart are regulated by specialised muscles or the nodal tissue which is present in the upper corner of right atrium. This type of heart which is auto-regulated by itself is known as myogenic heart.