1. Which amino acid has a methyl group as R?
a) Serine
b) Glycine
c) Valine
d) Alanine
View Answer

2. Which amino acid has a hydroxy methyl group as R?
a) Tryptophan
b) Lysine
c) Serine
d) Leucine
View Answer

Answer: c
Explanation: An amino acid having a chiral carbon, surrounded by an amino group, an acid group, a hydrogen atom and a hydroxymethyl group as the R group is serine. It is a polar amino acid due to its R group.

3. Which of these is an amino acid with pH less than 7?
a) Valine
b) Lysine
c) Glutamic acid
d) Histidine
View Answer

Answer: c
Explanation: a pH lesser than 7 signifies that the amino acid is acidic in nature. Glutamic acid has pH less than 7, hence it is an acidic amino acid. Histidine and lysine are basic while valine is a neutral amino acid.

4. Which of these is a neutral amino acid?
a) Valine
b) Histidine
c) Lysine
d) Aspartic acid
View Answer

Answer: a
Explanation: Valine is a neutral amino acid. Histidine and lysine are basic amino acids, having a pH greater than 7, while aspartic acid is an acidic amino acid and has a pH lesser than 7. Valine is hydrophobic.

5. Which of these amino acids is not aromatic?
a) Tyrosine
b) Methionine
c) Tryptophan
d) Phenylalanine
View Answer

Answer: b
Explanation: Aromatic amino acids are amino acids in which the side-chain contains an aromatic ring. Tyrosine, tryptophan and phenylalanine have aromatic rings in their side chains and are hence, aromatic. Methionine is not aromatic.

Answer: c
Explanation: The amino group and the acidic group or an amino acid are both ionizable and can exist in zwitter ionic form. However, due to their ionizable property, their structure does not always remain the same at different pH.

Answer: a
Explanation: Palmitic acid is a saturated fatty acid having 16 carbon atoms including the carbon of the carboxyl group. It is water insoluble. It does not have any double bonds in its structure and is hence saturated.

Answer: c
Explanation: The formula for glycerol is C3H8O3. It has 3 carbon (C) atoms, 8 hydrogen (H) atoms, and 3 oxygen (O) atoms. each carbon atom is bonded to an -OH (hydroxyl) group. Glycerol has antimicrobial and antiviral properties.

10. Fats have higher melting points than oils. True or false?
a) True
b) False
View Answer

11. Which of these makes up the cell membrane?
a) Peptidoglycans
b) Polysaccharides
c) Glycoproteins
d) Phospholipids
View Answer

Answer: d
Explanation: The cell membrane is a phospholipid bilayer. The polar phosphorus groups are hydrophilic and face outwards while the fatty acid tails are non-polar, hydrophobic and face each other.

12. Which nitrogenous base is not found in RNA?
a) Guanine
b) Adenine
c) Thymine
d) Cytosine
View Answer

Answer: c
Explanation: N nucleoside consists of a nitrogenous base such as adenine, guanine, cytosine or thymine linked to a deoxyribose sugar. When a phosphate group is attached, it is known as a nucleotide. 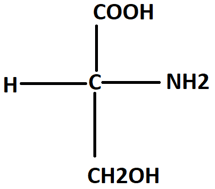 Answer: a
Explanation: The given amino acid has a hydroxy methyl group attached to the alpha carbon or chiral carbon. Hence, the amino acid is serine. Glycine is the simplest amino acid with its R group being an H atom.

15. Identify the nitrogenous base. 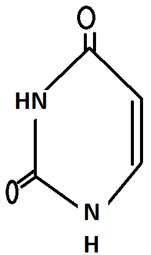 Answer: b
Explanation: The given structure is an aromatic heterocyclic organic compound known as a pyrimidine. It has two nitrogen atoms and four carbon atoms. The given pyrimidine is uracil which is found in RNA.