1. Which of the following is not included in the excretory system of humans?
a) Cloaca
b) Kidneys
c) Ureters
d) Urethra
View Answer

Answer: a
Explanation: In humans, the excretory system consists of a pair of kidneys, one pair of ureters, a urinary bladder, and urethra. Kidneys are reddish-brown and bean-shaped structures.

Answer: b
Explanation: Kidneys are reddish-brown, bean-shaped structures situated between the levels of the last thoracic and third lumbar vertebra close to the dorsal inner wall of the abdominal cavity.

4. Through which of the following nerves and blood vessels enter the kidneys?
a) Hilum
b) Tubules
c) Pelvis
d) Medulla
View Answer

Answer: a
Explanation: Through the hilum, the nerves, the ureters and the blood vessels enter the kidneys. The hilum is a notch which is present towards the centre of the inner concave surface of the kidney.

5. Inside the kidney, there are three zones.
a) True
b) False
View Answer

Answer: b
Explanation: The outer layer of the kidney is a tough capsule. Inside the kidney, there are two zones, an outer cortex, and an inner medulla. Inner to the hilum, a broad funnel-shaped space is presently called the renal pelvis.

6. Which of the following is responsible for the formation of Columns of Bertini?
a) Medulla
b) Renal pelvis
c) Calyces
d) Cortex
View Answer

7. Which of the following is incorrectly marked in the given diagram? 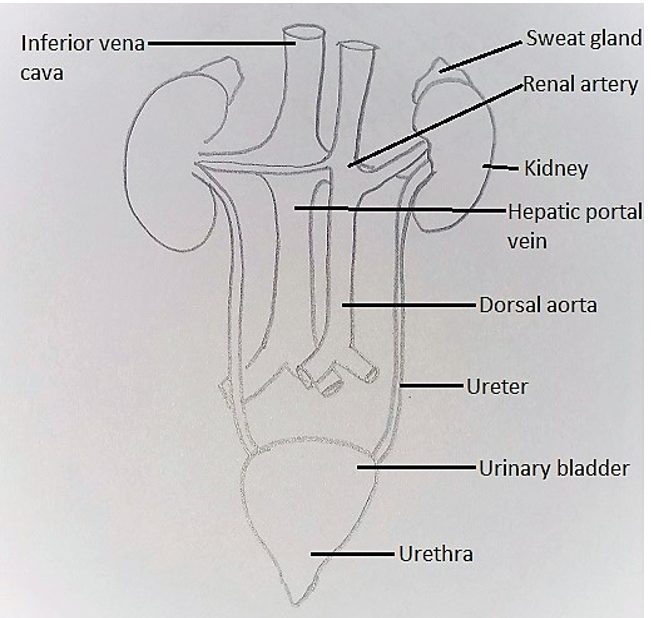 Answer: b
Explanation: The correct labelling of the given diagram is as shown below: 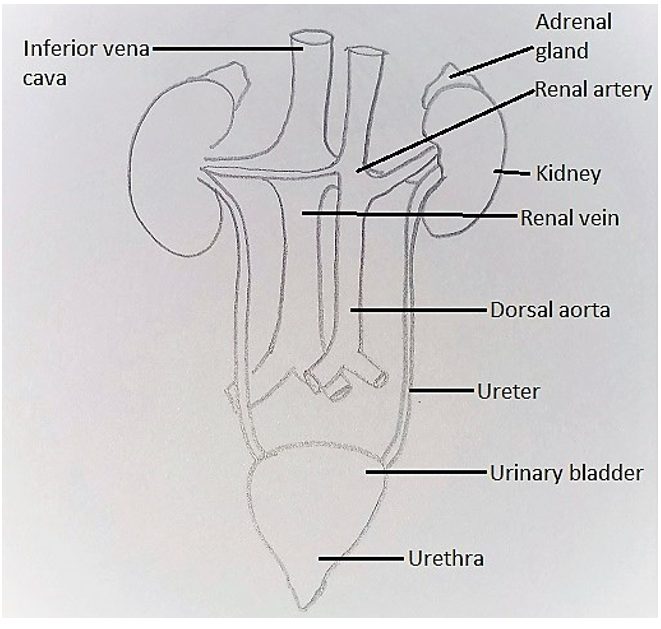 8. How many nephrons are present in each kidney?
a) One million
b) One billion
c) One trillion
d) Two million
View Answer

Answer: a
Explanation: Each kidney has approximately one million complex tubular structures called nephrons. These nephrons are the structural and functional units of the kidneys.

9. In how many parts a nephron is divided?
a) One
b) Two
c) Three
d) Four
View Answer

10. What will happen if the diameter of the afferent arteriole is less than efferent arteriole?
a) Dilute urine
b) Concentrated urine
c) No ultrafiltration
d) Black urine
View Answer

11. What does the question mark represents in the given figure? Answer: c
Explanation: The correct labelling of the given figure is as shown: 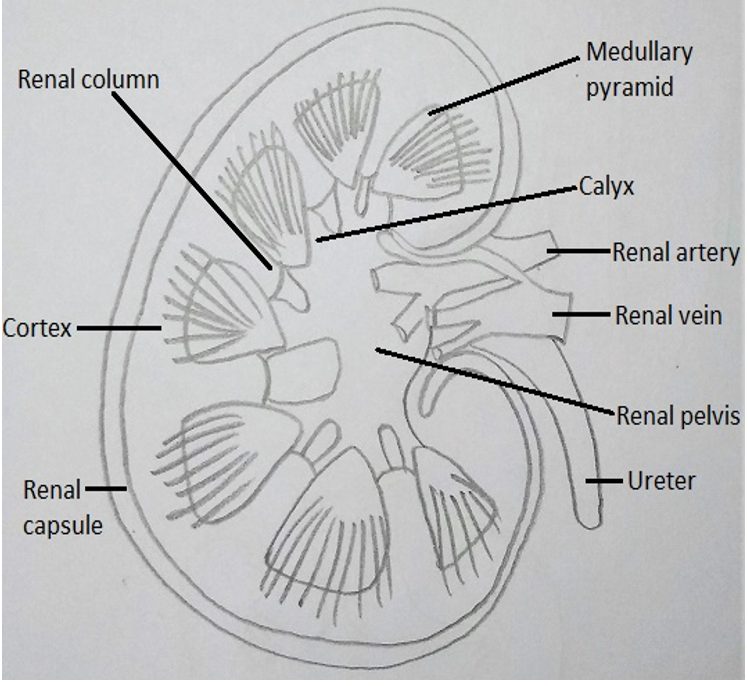 This figure represents the longitudinal section or a diagrammatic view of a kidney.

12. Starfishes are aminotelic organisms.
a) True
b) False
View Answer

Answer: a
Explanation: Starfishes are aminotelic organisms as they excrete amino acids directly into the urine. Hippuric acid is an excretory waste formed by the combination of benzoic acid and glycine in mammals.

Answer: a
Explanation: Osmoregulators are the animals that cannot change their body osmolarity according to their external environment. They cannot tolerate a wide range of salinity.

14. Which of the following organism is not an osmoconformer?
a) Hagfish
b) Spongilla
c) Marine invertebrates
d) Skates
View Answer

Answer: b
Explanation: Osmoconformers are the animals that can change their body osmolarity according to the external environment like hagfish, marine invertebrates, sharks, and skates.

15. Which of the following is not an adaptation of kangaroo rat?
a) Drinks water
b) Feeds on fatty seeds
c) Excretes concentrated urine
d) The nasal counter current system
View Answer

Answer: a
Explanation: Kangaroo rat does not drink water as it feeds on fatty seeds because 1g of fat oxidation produces a double amount of water. It excretes out concentrated urine and has a nasal counter current system.