Answer: a
Explanation: Trichloroacetic acid is used for the chemical analysis of living tissues like a vegetable or a piece of liver, etc. and the tissue is grinded using a mortar and a pestle.

Answer: b
Explanation: Biomolecules means the molecules of life or all the carbon compounds that we get from living tissues can be called as biomolecules.

4. What is the use of elemental analysis?
a) To add those nutrients in food
b) To find the elemental composition of living tissues
c) To gain confidence
d) To research the unknown
View Answer

Answer: b
Explanation: Elemental analysis gives the elemental composition of living tissues in the form of hydrogen, oxygen, chlorine, carbon, etc. while analysis for compounds gives an idea of the kind of organic and inorganic constituents present in living tissues.

5. Why do we use dry weights for the chemical analysis?
a) Because it is vulnerable
b) Because of water leaks everywhere
c) Because water is not absorbed by chemicals
d) Because different organisms have different water-absorbing capacities
View Answer

Answer: d
Explanation: During a chemical analysis, one weighs a small amount of living tissue, say a leaf or liver and this weight is known as wet weight. After that, we dry it. All the water evaporates. The remaining material gives dry weight. Now because different organisms have different water-holding capacities, so their wet weights would be different.

6. Amino acids contain an amino group and an acidic group at different carbons
a) True
b) False
View Answer

Answer: b
Explanation: Amino acids are organic compounds containing an amino group and an acidic group as substituents on the same carbon i.e., the α carbon. Hence, they are called α-amino acids.

8. Based on which of the following there are different kinds of amino acids?
a) Nature of R group
b) Nature of amino group
c) Nature of carboxyl group
d) Nature of hydrogen
View Answer

Answer: a
Explanation: Based on the nature of the R group there are many amino acids. However, those which occur in proteins are only of twenty types. The R group can be hydrogen, alcohol, etc.

9. What is the name of the given structure? 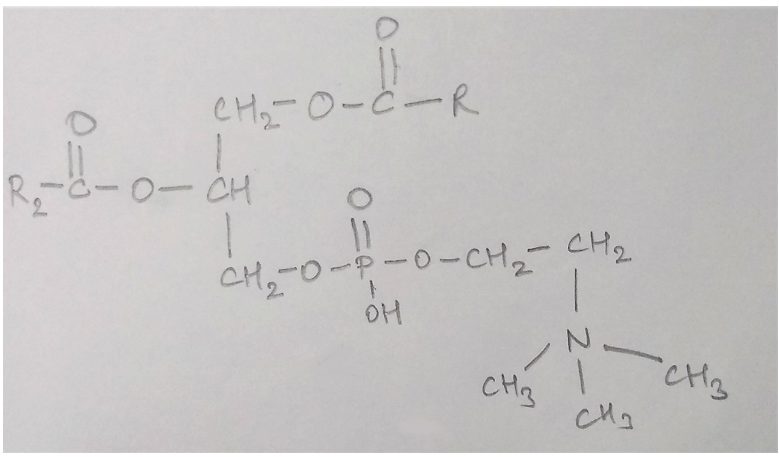 Answer: c
Explanation: The given structure depicts a phospholipid known as lecithin. These lipids have phosphorous and a phosphorylated organic compound in them. Lecithin is found in the cell membrane of every cell and on the surface of lung alveoli.

10. Which of the following is a basic amino acid?
a) Tryptophan
b) Tyrosine
c) Lysine
d) Glutamic acid
View Answer

11. What is the name of the given structure? Answer: b
Explanation: The given structure represents adenine. Living organisms have several carbon compounds in which heterocyclic rings can be found. Some of these are nitrogen bases- adenine, guanine, cytosine, uracil and thymine.

12. Lipids are generally water-soluble.
a) True
b) False
View Answer

Answer: b
Explanation: Lipids are generally water – insoluble. They could be simple fatty acids. A fatty acid has a carboxyl group attached to an R group. The R group could be a methyl, ethyl or any higher number of carbon – containing groups.

14. Which of the following is not a nucleotide?
a) Adenylic acid
b) Thymidylic acid
c) Guanylic acid
d) Cytidine
View Answer

15. What is the name of the given structure? 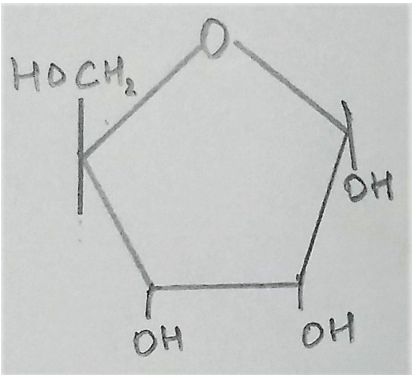 Answer: a
Explanation: The given structure represents ribose. Sugars like ribose and deoxyribose when are found attached to a nitrogen base, they are called nucleosides.