This set of Biology Aptitude Test for Class 11 focuses on “Animals – Organs and Organ System – 2”.

Answer: a
Explanation: Cockroaches are brown or black bodied animals that are included in class Insecta of Phylum Arthropoda. Bright yellow, red and green coloured cockroaches have been reported in tropical regions.

2. Where do the cockroaches generally live?
a) In moist places
b) In dry places
c) In damp places
d) In bright spaces
View Answer

Answer: c
Explanation: Cockroaches are nocturnal omnivores that live in damp places throughout the world. They have become residents of human homes and thus are serious pests and vectors of several diseases.

3. In how many segments is the body of cockroach divided?
a) One
b) Two
c) Three
d) Four
View Answer

Answer: c
Explanation: The body of the cockroach is segmented and divisible into three distinct regions- head, thorax and abdomen. The entire body is covered by a hard chitinous exoskeleton which is brown.

4. Which of the following is not included in the mouthparts of the cockroaches?
a) Collateral glands
b) Maxilla
c) Mandible
d) Hypopharynx
View Answer

Answer: a
Explanation: The mouth-parts of the cockroach consist of a labrum (upper lip), a pair of mandibles, a pair of maxillae and a labium (lower lip). A median flexible lobe acts as a tongue, which is also known as hypopharynx.

6. Which of the following segments is not involved in the formation of a genital pouch in male cockroaches?
a) 7th sternum
b) 9th tergum
c) 10th tergum
d) 9th sternum
View Answer

Answer: a
Explanation: 7th sternum is not involved in the formation of the genital pouch in the male cockroaches. Their genital pouch is a chamber which lies at the hind end of the abdomen. The genital chamber is bounded dorsally by 9th and 10th terga and ventrally by 9th sternum. It contains dorsal anus, ventral male genital pore and gonapophysis. It is also surrounded by some phallomeres.

7. How many chitinous teeth are present in the gizzard of cockroaches?
a) Seven
b) Two
c) Eleven
d) Six
View Answer

8. What is the function of the part labelled as a question mark in the given diagram? 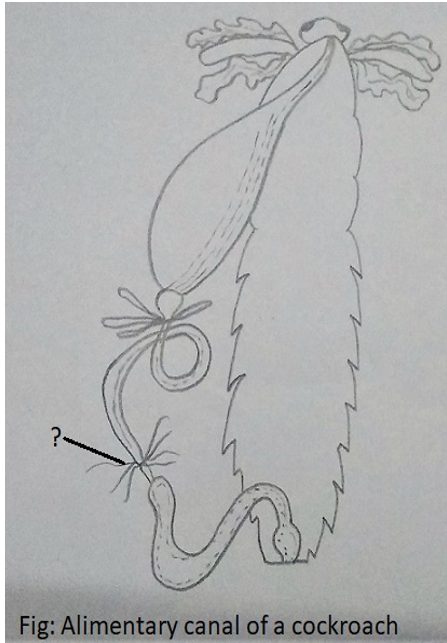 Answer: c
Explanation: The question mark in the given figure represents the Malpighian tubules. They are present at the junction of midgut and hindgut and are 100-150 in number. They help in removal of excretory products from haemolymph, thus they help in excretion. The correct labelling of the diagram is as shown below: 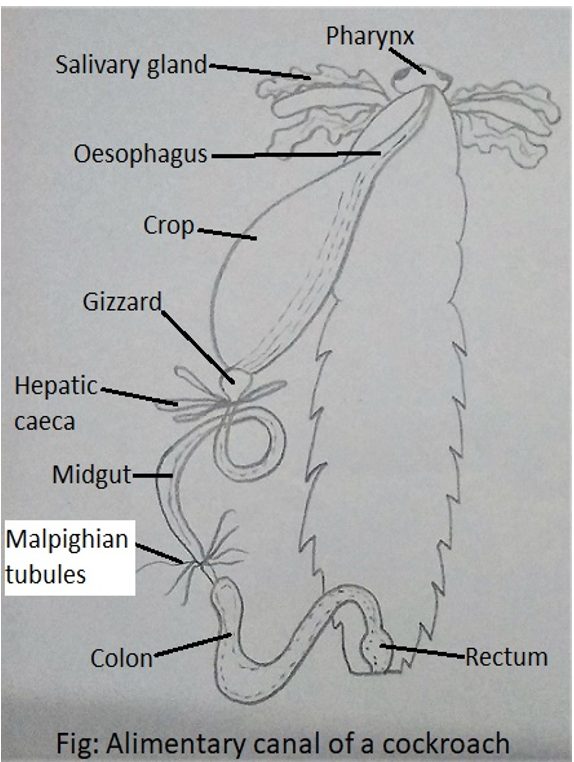 9. How many chambers are present in the heart of a cockroach?
a) Twelve
b) Ten
c) Sixteen
d) Thirteen
View Answer

Answer: d
Explanation: The heart of cockroach consists of an elongated muscular tube lying along the mid-dorsal line of thorax and abdomen. It is differentiated into thirteen funnel – shaped chambers with ostia on either side.

10. On which side of the body of cockroaches are the spiracles present?
a) Dorsal
b) Lateral
c) Ventral
d) Bottom
View Answer

Answer: b
Explanation: The respiratory system of cockroaches consists of a network of the trachea, that open through 10 pairs of small holes called spiracles which are present on the lateral side of the body.

11. Cockroaches can transmit a variety of viral diseases.
a) True
b) False
View Answer

Answer: b
Explanation: A few species of cockroaches can thrive in and around the human habitat. They are pests because they spoil food and contaminate it with their smelly excreta. They can also transmit a variety of bacterial diseases by contaminating the food material.

12. In what form do the cockroaches excrete out their nitrogenous wastes?
a) Ammonia
b) Urea
c) Uric acid
d) Gluconic acid
View Answer

Answer: c
Explanation: Cockroaches absorb nitrogenous waste products and convert them into uric acid which is excreted out through the hindgut. Therefore, they are also called as uricotelic organisms.

Answer: b
Explanation: The compound eyes of cockroaches are situated at the dorsal surface of the head. Each eye consists of about 2000 hexagonal ommatidia. With the help of several ommatidia, a cockroach can receive several images of an object.

14. Which of the following structures in the given diagram is responsible for secreting the outermost membrane of spermatophore? 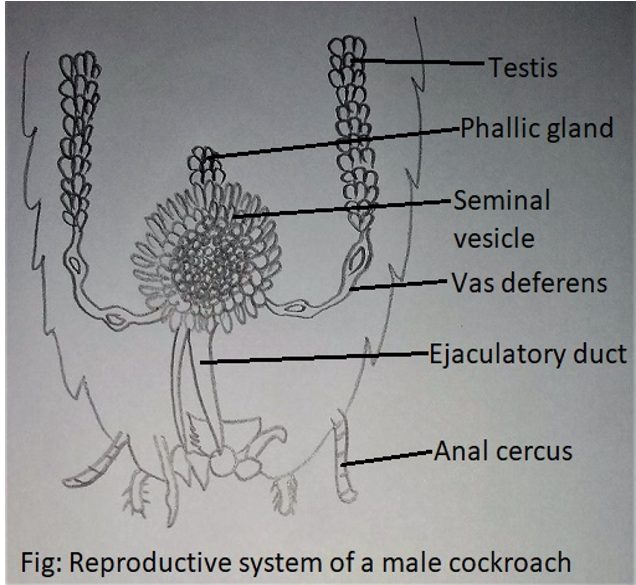 15. Which of the following labelled structures are responsible for the formation of the genital pouch? Answer: d
Explanation: The correct labelling of the diagram is as follows-
D and E represent genital chamber and vestibulum respectively which are responsible for the formation of the genital pouch in female cockroaches. 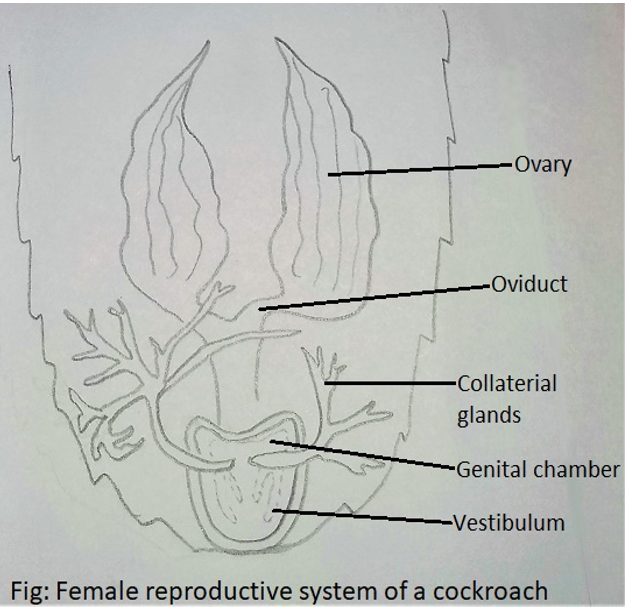