2. What does scavenging air mean?
a) Burnt air containing combustion products
b) Air sent under compression
c) Forced air for cooling the engine cylinder
d) Air used for forcing the burnt gases out of cylinder during the exhaust period
View Answer

Answer: d
Explanation: Scavenging air is defined as the air used for forcing the burnt gases out of cylinder during the exhaust period.

4. ____________ is the method of governing used in petrol engine.
a) Quality governing
b) Hit and mass governing
c) Quantity governing
d) All of the mentioned
View Answer

Answer: a
Explanation: Quality governing is generally used in petrol engines as the quantity of air -fuel mixture flowing into the cylinder is varied accordingly and this may be done by decreasing the lift of the inlet valve or by throttling the mixture before it is made to enter the engine cylinder.

Answer: b
Explanation: Hunting occurs due to load variation and this is only when the governor is not controlled properly.
advertisement

6. Maximum torque is generated by an engine when ______________
a) it runs at lowest speed
b) it develops maximum power
c) it consumes maximum fuel
d) it runs at maximum speed
View Answer

Answer: a
Explanation: Maximum torque is generated by an engine when it runs at lowest speed while maximum power is developed when the engine rums at its maximum speed.

7. With an increase of the number of cylinders in a multicylinder engine the power to weight ratio ______________
a) decreases
b) increases
c) remains unaffected
d) none of the mentioned
View Answer

Answer: d
Explanation: Brass is used to make radiator pipes due to its heat resistance capacities.

10. ____________ is used to check the state of charge of a battery.
a) Battery charger
b) Hygrometer
c) Hydrometer
d) Battery eliminator
View Answer

To practice all areas of IC Engine, here is complete set of 1000+ Multiple Choice Questions and Answers. 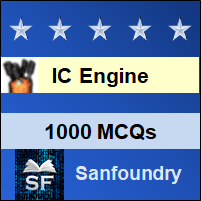