1. _______ is the type of wall which consists of two separate walls with a gap in between them.
a) Partition wall
b) Cavity wall
c) Party wall
d) Separating wall
View Answer

Answer: b
Explanation: Partition walls are built to divide the space within the building. Cavity walls are the walls which consist of two separate walls with a gap in between them. Party walls separate adjacent buildings occupied by different owners and separating walls separate different residencies within the same building.
advertisement

Answer: c
Explanation: Cavity wall is comprised of two separate walls. These are called leaves. They are also known as skins. There is a cavity between these leaves. Hence, these are called cavity walls.

3. Cavity walls are usually the inner walls of the building.
a) True
b) False
View Answer

Answer: b
Explanation: Cavity walls are usually the outer walls of the building because they are constructed for providing thermal and sound insulation to the buildings. They also prevent the moisture from entering the building and hence prevent the formation of cracks in the building.

Answer: a
Explanation: While constructing a cavity wall, it should be kept in mind that the inner, as well as the outer skin of the cavity wall, should not be less than 10 cm (half brick). The size of the cavity may vary from 4 to 10 cm.

Answer: d
Explanation: A huge amount of air is present inside the cavity of a cavity wall which is a poor conductor of heat. Hence cavity walls provide great thermal insulation to the buildings. The insulating value of a cavity wall is 25% greater than a solid wall.
advertisement 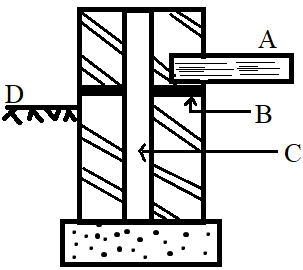 Answer: d
Explanation: The above is a figure of cavity concreted up to ground level. In the figure, A represents flooring, B represents DPC, C represents cavity and D represents the ground floor.

Answer: b
Explanation: In a cavity wall, it must be ensured that the width of the cavity should not be more than 100 mm. Also, it should not be less than 40 mm.

Answer: c
Explanation: Building Regulations of U.K. specifies that the wall ties should be placed at distances apart not exceeding 450 mm vertically and 900 mm horizontally. There should be at least 5 ties per square meter of the wall.
advertisement

Answer: b
Explanation: In a cavity wall, weep holes are provided at the bottom of the outer skin at an interval of 1 m. A weep hole is a small opening that allows the drainage of water. They are usually located at the bottom so as to ensure proper drainage.

To practice all areas of Building Construction, here is complete set of 1000+ Multiple Choice Questions and Answers. 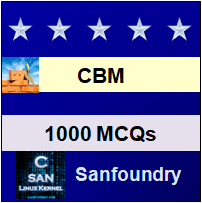