This set of Building Materials Questions and Answers for Freshers focuses on “Stairs Technical Terms”.

1. A __________ is defined as a sequence of steps and it is provided to afford the means of Ascent and Descent between the floors or landings.
a) Stair
b) Beam
c) Roof
d) Sidewalk
View Answer

Answer: a
Explanation: The apartment or room of building, in which the stair is located, is known as a staircase and opening or space occupied by stair is known as a Stairway.

2. _________ is the vertical member which is fixed between string and handrail to give support to the handrail.
a) Baluster
b) Balustrade
c) Flight
d) Barrister
View Answer

Answer: a
Explanation: The combined framework of handrail and balusters is known as balustrade or barrister. Whereas, flight is defined as an unbroken series of step between the landing.

Answer: c
Explanation: Handrail is generally moulded and some forms of handles varies with shape. The Handrail serves as a guide rail and it should be provided at a convenient height so as to give grasp to the hand during Ascent and descent.
Note: Join free Sanfoundry classes at Telegram or Youtube
advertisement
advertisement

4. _________ is the horizontal distance between the faces of two consecutive Risers.
a) Riser
b) Flight
c) Going
d) Newel post
View Answer

Answer: c
Explanation: Whereas, Nawel post is the vertical member with is placed at the ends of flight to connect the ends of Strings and handrails.

5. The horizontal platform between two flights of a Stair is known as the _________
a) Landing
b) Pitch
c) Nosing
d) Rise
View Answer

Answer: a
Explanation: A landing facilitates change of direction and provides an opportunity for taking rest during the use of a stair. Whereas, the vertical distance between two consecutive threads is known as a rise.
Take Construction and Building Materials Practice Tests - Chapterwise!
Start the Test Now: Chapter 1, 2, 3, 4, 5, 6, 7, 8, 9, 10

Answer: d
Explanation: The term line of Nosing is used to denote an imaginary line parallel to the strings and tangential to the Nosing. It is useful in the construction of handrails.

Answer: c
Explanation: Whereas, the angle of inclination of the stairs with the floor is known as a Pitch. It also indicates the angle which the line of nursing makes with the horizontal.
advertisement

Answer: a
Explanation: Riser includes the length of landings also. Whereas, Scotia is an additional finish or moulding provided to the nosing or tread to improve the elevation of the step and to provide strength to the nosing.

Answer: c
Explanation: Whereas, bullnose step is generally provided at the bottom of flight. It projects in front of the Newel post and it ends form a circular quadrant in a plan.
advertisement

Answer: d
Explanation: Whereas, the under surface of a Stair is known as the soffit. It is generally covered with ceiling or finished with plaster.

Answer: a
Explanation: Whereas, Round-ended step is similar to a boon or step accept that its end or ends are semi-circular in plan. And, a common step has a curved riser and tread.

To practice all areas of Building Materials for Freshers, here is complete set of 1000+ Multiple Choice Questions and Answers. 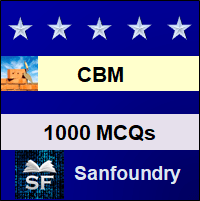