1. RNA on hydrolysis does not yield which of the following?
a) Amino acid
b) Pentose sugar
c) Nitrogen base
d) Phosphoric acid
View Answer 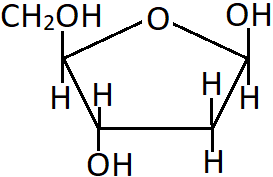 Answer: d
Explanation: The compound shown is β-D-2-deoxyribose which is a pentose sugar. It has no oxygen (in the form of hydroxy) attached to the C2 carbon. It is the sugar moiety in deoxyribonucleic acid (DNA).

3. DNA is a polynucleotide.
a) True
b) False
View Answer

Answer: a
Explanation: Chromosomes are made up of proteins and nucleic acids. Nucleic acids are of mainly two types, DNA and RNA. Since they are long chain polymers of nucleotides, they are also called polynucleotides.

4. Which of the following bases is not present in DNA?
a) Adenine
b) Guanine
c) Thymine
d) Uracil
View Answer

Answer: c
Explanation: Bases are nitrogen containing heterocyclic compounds present in nucleic acids. Adenine has no keto group, guanine and cytosine have one keto group each, and thymine and uracil have two keto groups in their rings.

Answer: a
Explanation: Nucleic acids are made up of units of pentose sugar, base and phosphoric acid that are linked together to form long chain. The sugar moiety in RNA is β-D-ribose. 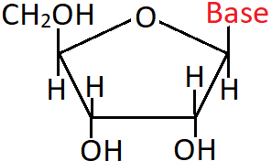 Answer: b
Explanation: A unit formed by the linking of a base to C1 carbon of a pentose sugar is called a nucleoside. The sugar shown is β-D-ribose and the base is uracil, hence it has to belong to RNA.

8. Nucleotides are linked together by bonds between 5’ and 2’ carbons of two different pentose sugars.
a) True
b) False
View Answer

Answer: b
Explanation: Nucleotides are joined together by phosphodiester linkage between the 5’ and 3’ carbon atoms of the pentose sugars.

9. Which of the following statements is correct?
a) Adenine is a pyrimidine
b) DNA is made of amino acids
c) Nucleosides do not contain phosphorous
d) RNA contains thymine
View Answer

Answer: c
Explanation: Adenine is a substituted purine as it has two fused rings. DNA is made up of nucleotides. RNA does not contain thymine, instead it has uracil. Nucleosides have a base attached to a pentose sugar. Since both the sugar and base do not contain phosphorous, nucleosides do not have it. On the other hand, nucleotides contain phosphorous in the form of phosphoric acid.

Answer: a
Explanation: Bases (nitrogen containing heterocyclic compounds) are of two types. Those that have a single ring are purines, and those that have two fused rings are pyrimidines. Adenine, guanine and cytosine are present in both RNA and DNA.

11. The attachment between the base and sugar in a nucleotide is through ______ bond.
a) hydrogen
b) peptide
c) phosphodiester
d) glycosidic
View Answer

Answer: d
Explanation: In nucleotides, the sugar ring is attached to the base by a bond between C1 carbon of the sugar and the nitrogen atom of the heterocyclic ring. This is a N-glycosidic bond. The phosphate group is bonded to the hydroxyl group of the C5 carbon of sugar.

12. Which part of the nucleotide is responsible for the formation of bonds in DNA double helix?
a) Base
b) Sugar
c) Phosphate group
d) Hydroxyl group of sugar
View Answer

Answer: b
Explanation: DNA does not contain uracil. Since adenine (A) pairs only with thymine (T) and cytosine (C) pairs with guanine (G), complementary strand will be TACGGCTAG.