Answer: b
Explanation: The forces of attraction become stronger as the molecules getter bigger in size and number of electrons increases. Hence, the methyl halides will have the lowest boiling points among all alkyl groups.

Answer: a
Explanation: Haloalkanes are polar in nature and have higher intermolecular forces of attraction in terms of dipole-dipole and van der Waal forces. Hence, the boiling points of haloalkanes are higher than their respective hydrocarbons.

Answer: d
Explanation: The boiling points increase with the number of halogen atoms as the molecular masses increase and so do the intermolecular forces of attraction.

Answer: b
Explanation: The branching of compounds makes it more compact and reduces the surface area, which in turn van der Waals attraction forces and thus, decrease the boiling point. 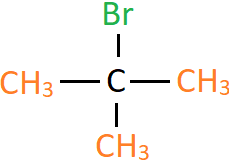 Answer: c
Explanation: Para isomers have the highest melting points due to their symmetry and ease with which they can fit into a crystal lattice compared to meta and ortho isomers.

9. The dipole moment of chloromethane is higher than that of fluoromethane.
a) True
b) False
View Answer

Answer: a
Explanation: Although the F atom is much more electronegative than Cl, the very small size of F compared to Cl results in the product of charge and distance, i.e., dipole moment, of CH3F to be lower than that of CH3Cl.

Answer: a
Explanation: The para isomer of dichlorobenzene is symmetrical and the two equal dipoles on opposite sides cancel and result in zero dipole moment.

Answer: d
Explanation: The density of haloalkanes increases with the number of halogen atoms present in because of increase in molecular weight.

13. Haloalkanes are more soluble in water than in alcohols.
a) True
b) False
View Answer

Answer: b
Explanation: Haloalkanes are very slightly soluble in water due to the strong hydrogen bonds between water molecules. However, they dissolve much more easily in organic solvents as the strength of new forces is similar to that of existing intermolecular attractions.

14. Which of the following has the lowest boiling point?
a) Bromomethane
b) Bromoform
c) Chloromethane
d) Dibromomethane
View Answer