1. The coordination number is determined by the number of both, sigma and pi bonds formed by the ligand with the central atom/ion.
a) True
b) False
View Answer

2. The coordination polyhedron geometry shown belongs to which of the following complexes?

4. What is the shape of the coordination polyhedron of [PtCl4]2-?
a) Linear
b) Square planar
c) Tetrahedral
d) Octahedral
View Answer

Answer: b
Explanation: The CN of the metal ion is 4 because Cl– is a unidentate ligand. The only possibility for the shape of its coordination polyhedra is square planar or tetrahedral. From crystal field splitting diagram, it is known that [PtCl4]2- is square planar.

5. Complexes in which a metal is attached to only one kind of donor group is called _______
a) Unidentate
b) Chelate
c) Homoleptic
d) Heteroleptic
View Answer

Answer: c
Explanation: Unidentate and chelate are words associated with ligands, whereas coordination complexes can be either homoleptic or heteroleptic depending upon whether only one kind or different kinds of ligands linked to the metal atom/ion respectively.

Answer: a
Explanation: [Co(NH3)6]Cl3 consists of only ammonia ligands in the complex and is hence homoleptic. The rest of the compounds consists of two kinds of ligates, either NH3 and Cl or NH3 and CO3, and hence they are heteroleptic.

7. The oxidation number of the central metal ion in a coordination entity is the charge it would carry if all the _________ are removed along with the electron pairs that are shared with it.
a) lewis acids
b) anions
c) ligands
d) didentate ligands
View Answer

Answer: c
Explanation: The oxidation number or primary valence of a central atom is its charge if all the ligands and its donor atoms are not present in the coordination entity.

8. The oxidation number of the central metal in a coordination entity is always a positive quantity.
a) True
b) False
View Answer

9. What is the denticity of the ligand shown in the figure? 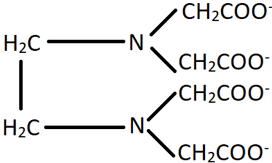 Answer: c
Explanation: The ion shown in the figure is ethylenediaminetetraacetate which is a hexadentate ligand and can bind through its two N atoms or four O atoms. Hence, its denticity is 6.

10. When a polydentate ligand uses all its donor atoms simultaneously to bond to a single metal ion, it is said to be a _______ ligand.
a) unidentate
b) didentate
c) chelate
d) ambidentate
View Answer