1. What is the common name of the simplest aromatic amine?
a) Aniline
b) Benzylamine
c) Benzenamine
d) Aminobenzene
View Answer

Answer: a
Explanation: The simplest amine is C6H5NH2 and is known as aniline. This name is also accepted as the IUPAC name. Its actual IUPAC name is benzenamine, or it may also be written as aminobenzene.

2. What is the substituent group in 2-methylbezebamine?
a) Methyl group
b) Amino group
c) Benzene ring
d) Methyl and amino groups
View Answer

Answer: a
Explanation: 2-Methylbenzenamine is an aromatic amine which is a derivative of benzenamine with the presence of a methyl group as substituent at the ortho position.

Answer: b
Explanation: p-Anisidine is better known as 4-methoxybenzenamine, which has a methoxy group at para position to the amino group. The common name anisidine is derived from the common names anisole and aniline.

4. What is the correct IUPAC name of the compound which has a benzene ring substituted with amino group at one position and a bromine atom at a position para to it?
a) 4-Aminobromobenzene
b) 4-Bromobenylamine
c) 4-Bromoaniline
d) p-Bromoaniline
View Answer

Answer: c
Explanation: This compound is an aromatic compound which is a bromo derivative of aniline and is named such that aniline is principle group. The position of bromine is indicated by number 4 which corresponds to the para position.

5. What is the IUPAC name of the shown compound? 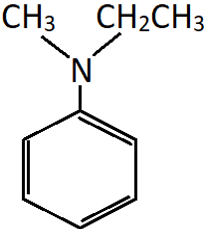 Answer: c
Explanation: There are three substituents viz., methyl group, ethyl group and phenyl group. Since the phenyl group is the largest, it is considered as the main group with CH3 and C2H5 acting as substituents. Also, ethyl is named before methyl due to alphabetical reasons.

Get Free Certificate of Merit in Chemistry - Class 12 Now!
advertisement

6. What is the correct name of the compound with two amino groups around a benzene ring at opposite (para) positions?
a) Benzenediamine
b) 4-Aminobenzenamine
c) p-Aminoaniline
d) Benzene-1,4-diamine
View Answer

Answer: d
Explanation: Both the amino groups (at para position to each other) are given equal importance and is named by giving the prefix di to the main compound. The prefix is also numbered 1 and 4, representing the positions at which amino groups are present in the benzene ring.

7. Identify the correct name of the shown compound.

Answer: b
Explanation: This is an aliphatic primary amine which is cyclic in structure. The two methyl groups at C-4 position act as substituents of the cyclohexyl ring with the amino group at C-1 position.

8. p-tert-Butyl aniline is a tertiary amine.
a) True
b) False
View Answer

9. Identify the incorrect name of the compound formed when two hydrogen atoms of ammonia are replaced by phenyl groups.
a) Diphenylamine
b) N-Phenylaniline
c) N-Phenylbenzenamine
d) N,N-Diphenylaniline
View Answer

Answer: d
Explanation: It is a secondary aromatic amine that will be formed. One of the phenyl groups will be considered as a substituent on nitrogen atom (N-phenyl) and the other will act as aniline with the N atom.

Answer: b
Explanation: Eight isomeric amines with the formula C4H11N are possible. Four of them are primary amines, three are secondary and one of them is a tertiary amine.

Answer: b
Explanation: In case of multiple functional groups, the amino group is considered as substituent and the other is regarded as the principle functional group and is given the lower carbon position. In this case, the compound is named as a derivative of ethanol.

13. Which of the following names are incorrect according to IUPAC?
a) 1-Phenylethanamine
b) N-Methylaniline
c) N-Butylaminoethane
d) Propane-1,2-diamine
View Answer

Answer: c
Explanation: The larger alkyl group should be considered as parent chain, which in this case is butyl group. Thus, the correct name will be N-ethylbutanamine.

14. If NH2 and NO2 exist in the same compound, it will be named as a derivative of the amino compound.
a) True
b) False
View Answer

Answer: a
Explanation: Since amino group (NH2) comes alphabetically ahead of nitro group (NO2), the compound is named as a derivative of amine with nitro as a substituent.