Answer: a
Explanation: Amines are clearly defined as ‘derivatives’ of ammonia obtained by replacement of one or more H atoms by an alkyl/aryl group. Therefore, NH3 itself is not an amine, but the base compound for all amines.

Answer: b
Explanation: There are three hydrogen atoms in ammonia. When one or more of these is substitutes by an alkyl/aryl group, the resultant compound is an amine. Hence, they are derivatives of NH3.

Answer: b
Explanation: The nitrogen of NH3 forms sp3 hybridised orbitals and also a valency of three (as it is attached to three hydrogen atoms). This results is one the orbitals having a lone pair of electrons, resulting in one unshared electron pair on nitrogen.

4. What is the geometry of ammonia molecule?
a) Trigonal planar
b) Square planar
c) Linear
d) Pyramidal
View Answer

Answer: d
Explanation: The nitrogen atom of ammonia undergoes hybridisation to form 4 sp3 orbitals. Three of these overlap with s orbital of H forming three N-H bonds. This results in a pyramidal geometry with N atom at the apex and three H atoms at the corners of a triangle base.

Answer: c
Explanation: CH3-NH-CH3 is an amine in which two hydrogen atoms are replaced by methyl groups. The hybridisation of N atom of amines is same as that of ammonia, and is also expected to have a pyramidal geometry, with N at the apex and the groups CH3, H and CH3 occupying the corners of a trigonal base.

Answer: b
Explanation: The bond angle for a standard tetrahedral geometry is 109.5°. But the ammonia molecule contains a lone electron pair on nitrogen. As it is closer to the N atom than the other orbitals, it creates a repulsive effect and pushes the Hydrogen atoms close to each other, thus reducing the bond angle to 107°.

7. What is the C-N-C bond angle in the following compound? 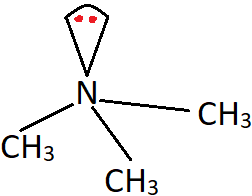 Answer: b
Explanation: The shown compound is an amine with three methyl group. This induces a steric effect between the three alkyl groups, and results in a slight increase in bond angle from 107° (bond angle in ammonia).

8. An amine with two or more alkyl groups does not have a lone pair of electron on nitrogen atom.
a) True
b) False
View Answer

Answer: b
Explanation: Amines are derivatives of ammonia. Nitrogen of NH3 is sp3 hybridised with one orbital having unshared pairs of electrons as it bonds to only three H atoms. Similarly, amines also have an electron lone pair on nitrogen.