Answer: a
Explanation: The listing of ligands in the formula of mononuclear coordination entities is according to alphabetical order, including abbreviated ligands. It does not depend on the atomicity, denticity or the charge on the ligand.

Answer: b
Explanation: The formula of the coordination entity should be enclosed within square brackets and there should be no space between the ligand and central metal. The number is written before the sign while indication the charge of the complex ion.

3. Which of the following ligands will be listed last in a coordination sphere?
a) Cl
b) CO
c) CO3
d) C2O4
View Answer

Answer: d
Explanation: The ligands given are chlorine (Cl), carbonyl (CO), carbonate (CO3) and oxalate (C2O4). Of these, the one that occurs last in alphabetic order is oxalate, and hence is will be listed at the end of the coordination entity.

Answer: c
Explanation: The charge of a coordination entity is written without the presence of the counter ion and is indicated outside the square brackets on the right side as a superscript with the number before the sign of charge.

5. Which of the following terms is used to indicate the number of individual ligands that do not include a numerical prefix, in the name of a coordination compound?
a) tetra
b) bis
c) tris
d) tetrakis
View Answer

Answer: a
Explanation: The terms bis, tris, tetrakis are used when the names of the ligand include a numerical prefix. Else, the prefixes used are mono, di, tri, tetra, etc.

Get Free Certificate of Merit in Chemistry - Class 12 Now!

Answer: a
Explanation: The complex ion given is cationic and hence the metal is named same as the element. Also, the oxidation number of cobalt is +3 as (en) is a neutral ligand and Cl has -1 charge. Thus, the correct naming for Co is cobalt(III).

Answer: b
Explanation: The prefix di is used only once for chlorido. For the PPh3 ligand, the prefix bis is used instead, as PPh3 (triphenylphosphine) already includes a numerical prefix in its name.

8. What would be the formula of the hypothetical compound shown in the figure? (Assume all ligands are monoatomic) 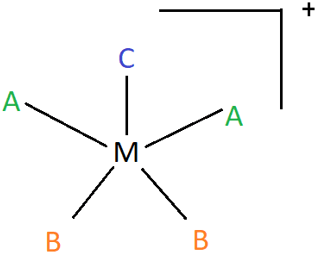 Answer: c
Explanation: A, B and C are distinct monoatomic ligands are simply listed in that order after the metal M, without the use of any parenthesis, and enclosed within square brackets.

9. If the complex ion is cationic, the name of the metal ends with suffix -ate.
a) True
b) False
View Answer

Answer: d
Explanation: Since Cl is an anionic ligand, it ends in -o, hence chlorido. Also, the complex ion is anionic, and the metal must end with the suffix -ate, hence palladate.