This set of Chemistry Question Papers for Class 12 focuses on “Nomenclature and Structure of Carbonyl Groups – 2”.

Answer: a
Explanation: In the common system, the ketones are named by listing the alkyl groups present in it in alphabetical order. The simplest dimethyl ketone is also known as acetone.

2. Which of the following will be the main group when present in a compound together?
a) -CHO
b) -CO
c) -OH
d) -Cl
View Answer

Answer: a
Explanation: If a compound contains both aldehyde and ketone groups, then the former is considered as the principal functional group, and the ketone is regarded as substituent. Thus, it is named as a derivative of alkanal.

3. _________ ketones are generally named by adding the name of the acyl group as prefix to the word phenone.
a) Ethyl methyl
b) Dialkyl
c) Alkyl phenyl
d) Diphenyl
View Answer

Answer: c
Explanation: For example, the ketone with COCH3 group attached to a benzene ring is named as acetophenone. Also, diphenyl ketone as benzophenone.

5. What is the name of the shown compound?

Answer: d
Explanation: This is a symmetrical dimethyl diketone. There are four carbons in the parent chain, including the two carbons of ketonic group and numbering can start from either end of the chain.

Answer: c
Explanation: Alpha represents the presence of a substituent on the carbon next to the carbon of the CO group. The ketone group is given the lower number in case of substituted ketones hence the number 2 is associated with the methyl group in this case.

Answer: b
Explanation: The formula of diisopropyl ketone is (CH3)2CHCOCH(CH3)2 which consists of 7 carbon atoms. The longest parent chain including the keto group is of 5 carbon atoms, leaving out one C atom from the methyl group at each end. This is a symmetric ketone and the methyl groups are present at the second and fourth carbon starting from any one end and the C-O double bond is present at the third carbon.

8. Identify the correct IUPAC name of the following compound. 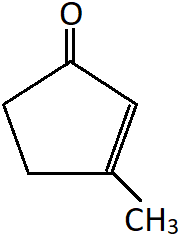 9. What is the IUPAC name of the following compound? 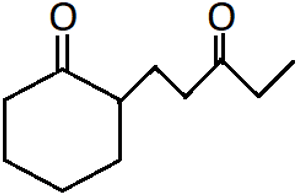 Answer: b
Explanation: The cyclic ketone is considered as the main group with the 3-oxopentyl keto group substituted at alpha carbon.

Answer: c
Explanation: The bond angles associated with the carbonyl group is approximately 120°, which is similar to that of a trigonal coplanar structure.

Answer: a
Explanation: The polarity of the C-O bond is due to the higher electronegativity of O than C. This means that oxygen is a nucleophilic centre and carbon is an electron seeking centre.

12. Ketones are more polar than ethers.
a) True
b) False
View Answer

Answer: a
Explanation: Ketones are carbonyl compounds which show neutral as well as dipolar resonance structures, which is not possible in ethers.