1. What is the general formula for an aliphatic alcohol? (R=alkyl group)
a) R-H
b) R-OH
c) R-CHO
d) R-COOH
View Answer

Answer: b
Explanation: Alcohols are compounds having OH group attached to an alkyl group and are hence hydroxy derivatives of hydrocarbons.

Answer: b
Explanation: Alcohols may be classified as mono-, di- tri- or polyhydric depending on whether it has one, two, three or more OH groups in its structure. Di- and trihydric alcohols are also classified as polyhydric.

4. Which of the following terms does not describe CH2=CH-CH2OH?
a) Primary
b) Monohydric
c) Allylic
d) Vinylic
View Answer

Answer: d
Explanation: The given compound contains a sp3 hybridised C-OH bond and is allylic. Ince it has only one alkyl group attached to the C bonded to the OH group, it is primary and the presence of only one OH group makes it monohydric.

5. Choose the most suitable classification for the shown compound? 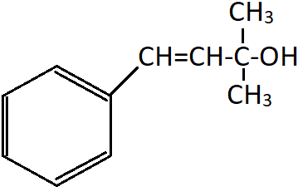 Answer: b
Explanation: The compound shown is a monohydric, tertiary alcohol in which the OH group is attached to the C next to a C-C double bond, hence make it allylic.

6. Primary alcohols van be benzylic in nature.
a) True
b) False
View Answer

Answer: a
Explanation: Benzylic alcohols contain a sp3 C-OH bond next to an aromatic ring, which means that the C atom can have zero or two alkyl groups attached to it along with the ring and OH group.

9. R-O-R, where R represent an alkyl or aryl group is the general formula of which compound?
a) Ether
b) Ester
c) Aldehyde
d) Ketone
View Answer

10. When the alkyl groups attached to either side of the oxygen atom of an ether id different, it is known as _______ ether.
a) simple
b) symmetrical
c) mixed
d) diethyl
View Answer

Answer: c
Explanation: If the alkyl or aryl groups on either side of O atom is different, it is known as a mixed or unsymmetrical ether.

Answer: d
Explanation: Since C6H5OC6H5 has the same aromatic ring on both sides of the oxygen atom, it a simple or symmetrical ether.

Answer: b
Explanation: Aromatic ethers are those in which at least one of the groups on either side of O atom is an aryl group. In CH3-O-CH2CH3, both the groups are alkyl and is hence an aliphatic ether.

13. Diethyl ether is a mixed ether.
a) True
b) False
View Answer

Answer: b
Explanation: Diethyl ether consists of ethyl (C2H5) groups on either side of O, hence it is a simple symmetrical ether.