1. When two alkyl groups are attached to the nitrogen atom in an amine, it is known as a _______ amine.
a) primary
b) secondary
c) tertiary
d) aromatic
View Answer

Answer: b
Explanation: Amines are classified as secondary or 2° when two of the hydrogen atoms of ammonia are replaced by an alkyl group and the third H remains attached as it is.

2. When only two hydrogen atoms are attached to the nitrogen of an amine, it is classified as a ________
amine.
a) primary
b) secondary
c) aliphatic
d) aromatic
View Answer

Answer: a
Explanation: When an amine has two hydrogen atoms individually bonded to the nitrogen, it means that the third group is an alkyl or aryl substituent. This is called as a primary or 1° amine as only one H atom is replaced.

3. Which of the following is not a classification of amines?
a) Primary
b) Secondary
c) Tertiary
d) Quaternary
View Answer

Answer: d
Explanation: Amines may be classified as primary, secondary or tertiary depending on whether 1, 2 or 3 hydrogen atoms of NH3 are replaced by alkyl/aryl groups respectively. Quaternary ammonium compounds are a different class of compounds where all four hydrogen atoms of ammonium salts are replaced by alkyl/aryl groups.

4. What is the most suitable classification of the following amine? 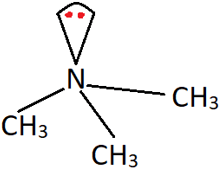 Answer: c
Explanation: This is trimethylamine, in which all the three hydrogen atoms are replaced by methyl (CH3) groups. Hence, it is a tertiary or 3° amine.

Answer: a
Explanation: The three groups attached to CH3CH2NHCH3 are one methyl group, one ethyl group and one hydrogen atom. This means that two of the hydrogen atoms are replaced and hence, it is a 2° or secondary amine.

6. Benzylamine is an aryl amine.
a) True
b) False
View Answer

Answer: b
Explanation: Aryl amines are aromatic amines in which the nitrogen atom is directly bonded to the benzene ring. Whereas in benzylamine (C6H5CH2NH2), the nitrogen is attached to the side chain of the aromatic ring. Hence, it is an arylalkyl amine.

7. Which of the following is the most suitable classification for C6H5NHCH3?
a) Tertiary amine
b) Aliphatic amine
c) Arylalkyl amine
d) Mixed amine
View Answer

Answer: d
Explanation: In the given amine, there are two substituents, one methyl group and one phenyl group. Hence, it is a secondary aryl amine and since both the substituent groups are different, it is a mixed amine.

9. Which of the following categories does CH3-NH-CH3 not belong to?
a) Secondary amine
b) Simple amine
c) Aliphatic amine
d) Mixed amine
View Answer

Answer: d
Explanation: There are two hydrogen that replaced by CH3 group, making it a secondary amine and since both the replacing groups are identical, it is a simple amine. Also, it is aliphatic in nature as both the substituents are alkyl groups.

Answer: b
Explanation: There can be an alkyl group attached to an aromatic amine, but at least one of the substituents should be a phenyl group in aryl amine. For arylalkyl amines (which are also aromatic), the benzene ring is not directly linked to the nitrogen.

Answer: a
Explanation: In the given amine, all the three hydrogens of NH3 are replaced by one each of propyl, ethyl and methyl groups, and is a tertiary or 3° amine. Since all the three groups are alkyl and different, it is an aliphatic mixed amine.

Answer: a
Explanation: Only one hydrogen atom is replaced by an aromatic group, in which the nitrogen is directly linked to the sp2 hybridised carbon of benzene ring. Hence, it is a primary aromatic aryl amine.

Answer: c
Explanation: All the three hydrogen atoms of ammonia are replaced by the same ethyl group in (CH3CH2)3N, which makes is a 3° simple amine.

Answer: b
Explanation: Since it should be primary, it should have an alkyl/aryl group attached to the NH2 molecule, and because it is arylalkyl, the nitrogen should be linked to an sp3 hybridised benzyl carbon rather than to an aryl carbon.

Answer: d
Explanation: Since the compound consists of a benzene ring, it invariably is an aromatic amine. Moreover, it also contains an alkyl methyl group beside the phenyl group and this makes it a mixed amine.