1. The reaction of carboxylic acids with NaHCO3 produces ______ which helps it to differentiate it from phenols.
a) H2O
b) CO
c) CO2
d) NaCl
View Answer

Answer: c
Explanation: Unlike phenols, carboxylic acids react with weak bases like hydrogen carbonates to give carbon dioxide, along with sodium carboxylate salt and water.

Answer: b
Explanation: Keq is the equilibrium constant of a reaction and Ka is the acid dissociation constant which is Keq[H2O]. The strength of an acid is generally by its pKa value rather than its Ka value.

4. What is the relation between the acidic strength of A and B? 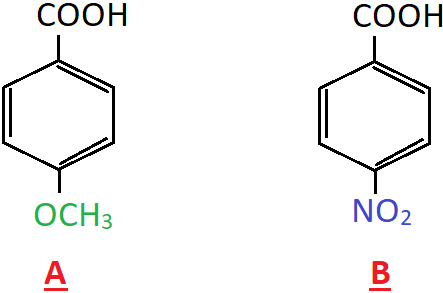 5. Which of the following is the stronger acid?
a) Acetic acid
b) Propanoic acid
c) Isobutyric acid
d) 2,2-Dimethylpropanoic acid
View Answer

Answer: a
Explanation: As the size of alkyl group (electron releasing) increases, the electron density on the O of OH group increases, and makes release of H+ ion more difficult. Thus, the release of proton from acetic acid will be easier compared to the higher acids, and is therefore the stronger acid.

Participate in Chemistry - Class 12 Certification Contest of the Month Now!

6. Which of the following is the strongest acid?
a) CH3COOH
b) CH2ClCOOH
c) CHCl2COOH
d) CCl3COOH
View Answer

Answer: b
Explanation: Halogen substituted carboxylic acids are stronger acid than their respective parent acids, because of the electron withdrawing and stabilizing nature of the halogen. Furthermore, as the distance of the halogen form the COOH group increases, the electron withdrawing influence decreases, and therefore the acidic character decreases.

Answer: c
Explanation: The electronegativity of carbon increases from sp3 to sp2 to sp hybridisation. The carbon attached to the carbonyl carbon of propionic acid id sp hybridised (due to triple bond) ang has a higher inductive effect on the COOH group and as a result has higher acidity compared to acrylic acid (sp2 carbon) or acetic acid (sp3 carbon).

10. It is given that the following compound has a higher pKa value than benzoic acid. Which is the most probable substituent group X of the compound?

11. Acrylic acid is a stronger acid than benzoic acid.
a) True
b) False
View Answer

Answer: b
Explanation: Both compounds contain a sp2 hybridised carbon atom next to the COOH group, but the double bond of a benzene ring is less electron releasing in nature than the vinyl carbon double bond of acrylic acid. This is because delocalisation in the resonance structures of benzoic acid destroys its aromatic character. Hence, benzoic acid is stronger than acrylic acid.

Answer: b
Explanation: Although CH3 is an electron releasing group and should reduce the acidic character of acids by destabilizing it, the presence of CH3 group at ortho position has a reverse effect and increases the acidic strength compared to benzoic acid. This is due to a combination of stearic and electronic factors.

Answer: c
Explanation: Bromine is an electron withdrawing group that disperse the negative charge on the carboxylate ion and strengthens its acidic character. p-Bromobenzoic acid has a pKa value of 3.96 compared to 4.19, which is the pKa value of benzoic acid.

15. The presence of CF3 group in an acid gives a higher acidic strength compared to the presence of NO2.
a) True
b) False
View Answer

Answer: a
Explanation: CF3 group is highly electronegative due to the presence of three F atoms and has a greater electron withdrawing and stabilizing influence on carboxylate ion than NO2 group.