This set of Chemistry Quiz for IIT JEE Exam focuses on “Biomolecules Carbohydrates – 3”.

1. Which of the following tests does glucose give?
a) Tollen’s test
b) 2,4-DNP test
c) Schiff’s test
d) Addition product with NaHSO3
View Answer

Answer: a
Explanation: Despite having a CHO group, glucose does not react with NaHSO3 to form an addition product and give either Schiff’s test or 2,4-DNP test like other aldehydes. However, it forms a silver mirror on treatment with Tollen’s reagent. These observations indicate the existence of glucose in other forms and gave way to the cyclic structure of glucose.

2. The α-D-glucose and β-D-glucose isomers of glucose are known as _______
a) enantiomers
b) stereoisomers
c) anomers
d) glycomers
View Answer

Answer: c
Explanation: In the cyclic structure of glucose, the pair of optical isomers that differ in the configuration only around the C1 carbon (anomeric carbon) are called anomers.

3. The hydroxyl group at which carbon is involved in ring formation in glucose?
a) C3
b) C4
c) C5
d) C6
View Answer

Answer: c
Explanation: Monosaccharides undergo intramolecular reaction to form cyclic hemiacetal structures. Generally in aldoses, the C4 or C5 carbon is involved in cyclisation. In glucose, the hemiacetal (six-membered ring) is formed between the CHO group and the OH group on the C5 carbon.

4. Which form of glucose is obtained by crystallization from hot and saturated aqueous solution at 371K?
a) D-form
b) L-form
c) α-form
d) β-form
View Answer

Answer: d
Explanation: When a saturated aqueous solution is heated to about 100°C and then crystallized, the β-form of glucose is obtained. On the other hand, a concentrated solution at room temperature on crystallization gives α-form.

5. When the α-form of glucose is dissolved in water and allowed to rest, what will be the percentage of β-form in this solution after some time?
a) 0
b) 36
c) 64
d) 100
View Answer

Answer: c
Explanation: When either α or β forms of glucose are dissolved in water and are allowed to stand, an equilibrium mixture of both forms is formed (36% α-form and 64% β-form). This is due to a spontaneous change in specific rotation of an optically active compound with time to an equilibrium value. This phenomenon is called as mutarotation.

7. Identify the compound from the Haworth projection shown.

Answer: a
Explanation: The α and β forms of glucose can be represented as a six-membered ring called pyranose, resembling the organic compound pyran. Since the OH group of anomeric carbon is at the opposite side to the OH at C3 carbon, it is the α-form of glucopyranose.

8. Glucose can exist in both a straight chain and ring form.
a) True
b) False
View Answer

Answer: a
Explanation: This is due to the observations where glucose in most cases behaves as an aldehyde and in some cases does not. This led to speculation of the existence of glucose in other forms where the CHO group was not present. The ring form of glucose was subsequently discovered.

9. Which of the following is incorrect with respect to fructose?
a) It is a ketohexose
b) It is present in honey
c) It has ‘L’ configuration
d) It is known as laevulose
View Answer

Answer: c
Explanation: Fructose is an important ketohexose that naturally occurs in fruits and honey. It has a ketonic group at C2 carbon with six carbon in a straight chain. It belongs to D-series (with respect to glyceraldehyde) and is laevorotatory.

10. What is the correct name of the following compound? 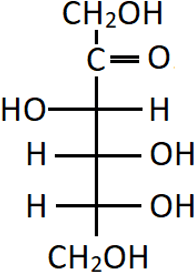 Answer: b
Explanation: Since the OH group on the carbon adjacent to the last CH2OH group is on the right-hand side, it is of D configuration. Also, fructose is naturally a laevorotatory compound, hence the (-) sign.

Answer: c
Explanation: The fructofuranose structure is obtained by the internal ketal formation by combining the keto group at C2 carbon and the OH group at C5 carbon.

12. Fructose exists as both pyranose and furanose structures.
a) True
b) False
View Answer

Answer: a
Explanation: In the free state, D-fructose exists as a six-membered ring (fructopyranose). However, in the combined state as a constituent in disaccharides, it exists in furanose form (five-membered hemiketal).

13. Identify the compound from the Haworth projection shown. 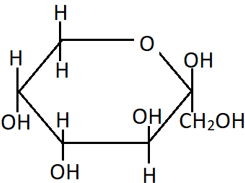 Answer: d
Explanation: This is the pyranose structure of fructose, where the C2 keto group and C6 OH group are involved in cyclisation. The α and β forms in this structure differ based on the arrangement of CH2OH and OH groups around the C2 carbon. Since in this compound, the OH at C2 is in the same side as the OH at C3, it is the β-form.

14. A solution having equal amount of D-glucose and D-fructose is called _____ sugar.
a) invert
b) fruit
c) brown
d) cane
View Answer

Answer: a
Explanation: When sucrose is heated with water, it gives a mixture of glucose and fructose, called invert sugar. It is named as such because of the difference in optical activity of the initial sugar and the product mixture.

Answer: b
Explanation: Due to its laevorotatory behaviour, fructose is known as laevulose. On the other hand, glucose is known as dextrose for the opposite reason. Fructose can exist as furanose or pyranose depending on its state (free or combined).