This set of Chemistry Online Test for Class 12 focuses on “Nomenclature of Coordination Compounds – 2”.

Answer: d
Explanation: The number of cations or anions is not denoted in the name of a coordination compound. In this case, the counter ion is named as potassium and not tripotassium. Also, CN is an anionic ligand and should end with -o, with the correct name being cyanido and not cyano.

Answer: c
Explanation: The ligand OH is a negative group and should end with -o. The correct name for the OH group is hydroxide and the metal is mentioned after the ligands.

Answer: b
Explanation: Nitrate is an ambidentate ligand and can bind through either O or N atom. In this case, it is written as (ONO) which implies that it binds through O atom, hence giving it the name nitrito-O.

Answer: a
Explanation: The parenthesis after manganese represents its oxidation state (+2) which is indicated outside the square bracket with sign following the number. The H2O molecule is a neutral ligand named as aqua.

Answer: c
Explanation: CN is anionic with charge -1 and there are 4 of them. Ni is given to have oxidation number +2 in the name of the compound. So, the total charge on the compound will be -4 + 2 = -2. This must be balanced by potassium ions which have charge of +1, so two of them will be required. Hence, the formula is K2[Ni(CN)4].

6. The term inside the parenthesis in the formula of mercury(I) tetrathiocyanato-S-cobaltate(III) is _________
a) Hg
b) SCN
c) NCS
d) Co
View Answer

Answer: b
Explanation: When the ligands are polyatomic, its formula is enclosed in parenthesis. The formula for the given compound is Hg[Co(SCN)4], where the thiocyanate ligand binds through the S atom.

Answer: c
Explanation: The ligands are bromine, chlorine, ammine and nitrite and according to IUPAC nomenclature they should be listed as per alphabetical order which is ammine (NH3), bromine (Br), chlorine (Cl) and nitrite (NO2).

8. An imaginary coordination entity named dipalidoqalidoralidometal(IV) according to the IUPAC norms, consists of ligands palide(P), qalide(Q) and ralide(R), all having charge of magnitude 1. The central atom is metal (M). Which of the following options best suits the complex described?
a) 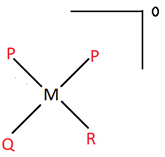 Answer: c
Explanation: All the ligands end with -o, which implies they are anionic and have charge -1. The oxidation number of the central atom is given as +4. There are a total of 4 ligands (2 P, 1 Q and 1 R) in the entity. Hence, the overall charge on the complex is +4 – 4 = 0.

Answer: d
Explanation: The coordination entity consisting of the metal atom/ion followed by ligands is enclosed within square brackets and not in parenthesis.

10. The prefixes bis, tris and tetrakis are used to indicate the number of individual ligands in the coordination entity.
a) True
b) False
View Answer

Answer: a
Explanation: Mono, di, tri, etc. are used when name of ligands don’t have a numerical prefix. If not, then bis, tris and tetrakis are used as prefixes.