This set of Chemistry Problems for IIT JEE Exam focuses on “Bonding in Coordination Compounds – 2”.

1. The crystal field theory considers the metal-ligand bond to be a _______ bond.
a) covalent
b) ionic
c) polar
d) hydrogen
View Answer

Answer: b
Explanation: The CFT is an electrostatic model which considers the bond between metal ion and the ligand to be ionic arising due to the electrostatic interactions between them.

2. In CFT, which of the following ligands will be treated as point dipoles?
a) Cl
b) NO2
c) CN
d) NO
View Answer

3. Which of the following orbitals does not belong to t2g orbitals?
a) dxy
b) dyz
c) dxz
d) dz2
View Answer

Answer: c
Explanation: According to the spectrochemical series, thiocyanate is weaker than isothiocyanate which is in turn weaker than amine and cyanide ligands.

5. By how much percentage does the energy of eg orbitals increase by from the average field splitting energy in octahedral complexes?
a) 40%
b) 45%
c) 50%
d) 60%
View Answer

Answer: d
Explanation: The energy of the two eg orbitals will increase by (3/5)Δo, that is 60% of the average energy that separates the field in octahedral complexes.

Get Free Certificate of Merit in Chemistry - Class 12 Now!

Answer: a
Explanation: According to the spectrochemical series, CO is the strongest ligand. The ligands en, amine and water are weaker than CO and their field strength decreases in that order.

Answer: b
Explanation: It has been observed that splitting energy in tetrahedral fields is considerably less than in octahedral complexes. To be precise, it has been found that Δt = (4/9) Δo.

8. Which of the following ligands is most likely to form high spin complexes in octahedral fields?
a) Cl–
b) OH–
c) C2O4–
d) CN–
View Answer

Answer: a
Explanation: Cl- is the weakest field ligand in the given options. The splitting field Δo is small and the energy separation between the eg and t2g orbitals are narrower. Hence, the electrons tend to occupy the eg orbitals easily and are likely to have a greater number of half-filled orbitals.

9. What will be the electronic configuration of d5 in terms of t2g and eg in an octahedral field when Δo<P, where P is the energy required for pairing of electrons in a single orbital?
a) t2g5 eg0
b) t2g2 eg3
c) t2g3 eg2
d) t2g0 eg5
View Answer

Answer: c
Explanation: When the field splitting is less than the pairing energy, the energy gap between the two sets of d orbitals is small. This allows the electrons to occupy the higher energy orbitals once the lower orbitals are singly occupied. Thus, the configuration will be t2g3 eg2, with one electron in each orbital.

Answer: b
Explanation: The splitting energy in tetrahedral fields is almost half of that of octahedral fields. Due to this, the orbital splitting energies are not very large, which makes it difficult for electron pairing and therefore low spin complexes are rarely formed.

11. Observe the orbital splitting diagram of a tetrahedral field and find the value of x. 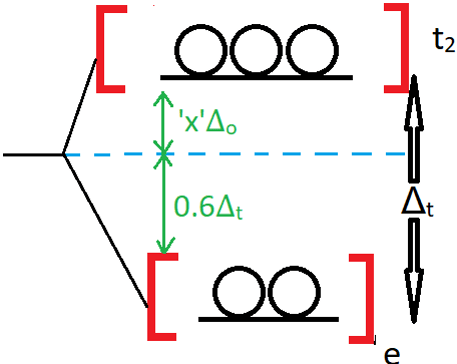 12. As the crystal field splitting energy in octahedral field increases, the wavelength of light absorbed _________
a) Increases
b) Decreases
c) Remains the same
d) May increase or decrease
View Answer

13. The complex [Co(H2O)6]3+ absorbs the wavelength of light corresponding to orange colour. Predict the colour of the coordination compound based on this information.
a) Red
b) Yellow
c) Blue
d) Colourless
View Answer

Answer: c
Explanation: This is because of the concept of complementary colours. The colour of the complex is complementary to that which is absorbed and is generated from the wavelength that is left over.

14. Hexaaquatitanium(III) chloride is a coloured compound that loses its colour on heating.
a) True
b) False
View Answer

Answer: a
Explanation: Heating the compound removes the water which is the ligand. In the absence of a ligand, crystal field splitting does not occur and hence the compound becomes colourless.