1. The wrong statement about leader line is _____________
a) A leader line is a thin continuous line connecting a note or a dimension figure.
b) One end of the leader terminates either in an arrowhead or a dot.
c) The leader is drawn vertical or horizontal or curved.
d) Use of common leaders for more than one feature should never be made.
View Answer

Answer: c
Explanation: The leader is never drawn vertical or horizontal or curved. It is drawn at a convenient angle of not less than 30o to the line to which it touches. When pointing to a circle or an arc it is drawn radially.
advertisement

2. Identify the ‘a’ in the given picture 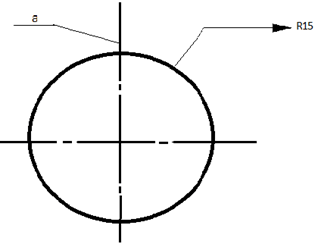 3. Identify the ‘a’ in the below given picture. 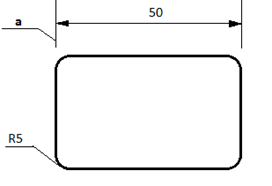 Answer: b
Explanation: Diameter is represented the unique way as shown in options which directly represents the circle and line at its center that is a center line where the diameter is measured. But radius is represented as capital R.

5. From below given figure, match the following. 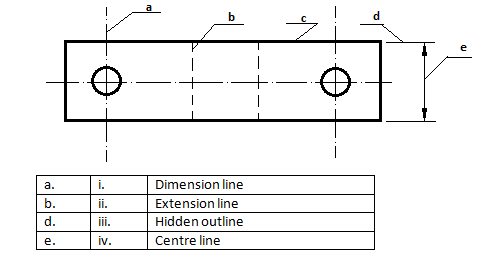 6. Identify the note in the below given figure. 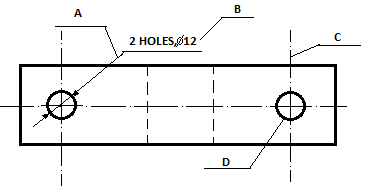 Answer: b
Explanation: A note gives information regarding specific operation relating to a feature. It is placed outside a view but adjacent to the feature concerned. It is so written that it may be read when the drawing is viewed from the bottom edge.
advertisement

7. It is recommended that a gap of about 2 mm should be kept between the extension line and an outline.
a) True
b) False
View Answer

Answer: b
Explanation: It is recommended that a gap of about 1 mm should be kept between the extension line and an outline or object boundary by the B.I.S. It extends by about 3 mm beyond the dimension line.

8. A dot may also be used to replace an arrowhead.
a) True
b) False
View Answer

To practice all areas of Engineering Drawing, here is complete set of 1000+ Multiple Choice Questions and Answers.