Answer: b
Explanation: Refer to the figure given below which represents the visual ray. These are parallel to each other and perpendicular to the plane of projection. It represents the projection of objects. 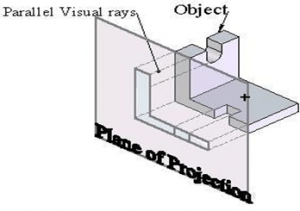 3. The plane upon which the top view is projected is known as ________
a) Horizontal
b) Frontal
c) Profile
d) Base
View Answer

Answer: a
Explanation: Talking of orthographic projection, it happens due to three views, top view, front view and side view. Projection of any object which occur by side view or front view happens to occur on vertical plane while top view projection falls on horizontal plane as seen in the figure below. 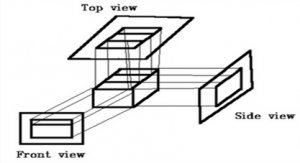 4. Which angle of projection does the figure resembles if it is lying in the 3rd coordinate? 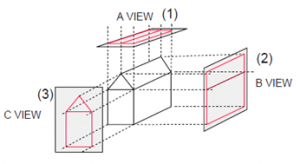 Answer: b
Explanation: Given in the question it lies in the 3rd quadrant. The plane of projection is assumed to be transparent. They lie between object and observer. When the observer views the object from the front, the rays of sight intersect the V.P, similarly when its top view is seen from bottom, the rays of sight intersect the H.P. The top view in this case comes above the front view and so it is third angle projection.

5. Front view will be projected on which plane if it is lying in the 3rd coordinate?

Answer: a
Explanation: As it lies in the 3rd quadrant it will show third-angle projection. When the observer views the object from the front, the rays of sight intersect the V.P. as object is between observer and plane and so according to figure above front view will intersect the 2nd plane.
Participate in Civil Engineering Drawing Certification Contest of the Month Now!

6. The following figure is lying in the 3rd coordinate, it shows us C view, which view does this “C” represents?

Answer: d
Explanation: By default only 3 views are used but in actual any no. of views can be taken as per requirement. Here by default three views can be seen as top, front and side view. Since it is in 3rd quadrant A and B view represents top and front view. And when from 3rd side the object viewed represents side view.

7. The ____________ is the plane upon which the side view is projected.
a) Horizontal plane
b) Profile plane
c) Vertical plane
d) Inclined plane
View Answer

Answer: b
Explanation: A third plane perpendicular to both coordinate planes, and hence to the ground line, is called a profile plane. This plane is vertical in position, and may be used as a plane of projection. A projection on the profile plane is called a profile view, or end view, or sometimes edge view, and is often required in machine or other drawing when the plan and elevation do not sufficiently give the shape and dimensions.
advertisement

Answer: c
Explanation: When the object is situated in front of the V.P. and the H.P. i.e. in the first quadrant and then projected on these planes is called 1st angle projection. The object lies between the observer and the plane of projection. In this the top view comes below the front view.

9. What does the red area formed on the plane represents?
a) Extrusion
b) Shadow
c) Reflection
d) Projection
View Answer

Answer: d
Explanation: It represents projection on the intersected plane of an object. The rays of sight are extended further to meet perpendicularly a vertical plane or horizontal plane thus forming the red area (in th fig.) on the planes.
advertisement

10. An advantage of this type of view is that each view shows the object all the way through as if it were transparent?
a) Planar
b) Horizontal
c) Auxiliary
d) Orthographic
View Answer

Answer: d
Explanation: The front, top, and right-side views are commonly considered the core group of views included by default, but any combination of views may be used depending on the needs of the particular design, these are – front, back, top, bottom, right side, left side views.