1. Which of the following is not a line segment?
a) Bamboo
b) Ruler
c) Laser beam
d) Pencil
View Answer

Answer: c
Explanation: A line segment is a part of a line that is bounded by two distinct end points, and contains every point on the line between its endpoints. A ray is a line with one end goes forever in the other direction. Here option Laser beam is ray and others are line segment.
advertisement

Answer: c
Explanation: The bisector of an angle is a ray whose end point is the vertex of the angle and which divides the angle into two equal angles. For the figrure given below BD line is the angular bisector dividing angle ABC in two equal parts.

3. What must you be given to construct an equilateral triangle by compass?
a) One side
b) One angle
c) Two side
d) One angle and one side
View Answer

Answer: a
Explanation: An equilateral triangle is one which has all three sides of the same length. For the figure given below, with centres P and Q and radius equal to PQ, draw arcs intersecting each other at R. After this draw lines joining R with P and Q. The triangle obtained is the equilateral triangle. 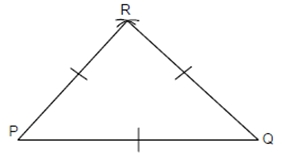 Answer: d
Explanation: Square is a combination of the properties of a rectangle and a rhombus, i.e. with four congruent sides similar to rhombus and with four right angles same as of rectangle. This can be understood from the figure below. 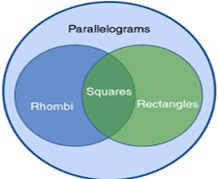 6. N number of circles are formed with a common centre, what is that geometry called?
a) Inscribed circle
b) Sphere
c) Circumscribed circle
d) Concentric circle
View Answer

Answer: d
Explanation: Two or more circles with same centre and different radii, are termed as concentric circle. Inscribed circle is the largest possible circle drawn inside a polygon, each side of the polygon must be tangent to the circle, while a circle containing a polygon in its interior touching all vertices of a plane figure is called circumscribed circle.

8. What is the below instrument called?

Answer: c
Explanation: A T-shaped ruler used in engineering drawing, consisting of a short crosspiece, which slides along the edge of the drawing board, and a long horizontal piece: used for drawing horizontal lines and to support set squares when drawing vertical and inclined lines.

Answer: a
Explanation: The part of a line that connects two points. It has definite end points. Adding the word “segment” is important, because a line normally extends in both directions without end. The figure shows a line segment AB with point C. Point C can divide the line segment in any ratio.
advertisement

10. Which geometric principle is used to justify the construction below?

11. The diagram below shows the construction of the perpendicular bisector of AB. 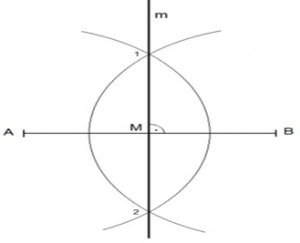 12. Find angle BDC shown in the figure below.

Answer: d
Explanation: Given both the perpendiculars are equal so according to postulate, equal side has equal angle opposite to it.
So, angle ADB = angle BDC, on equating both angles as 7x+17 = 3(4x – 1) x=4, and angle BDC = 45.