1. There are many types of heat treating processes available to steel. The most common are ____________ quenching, and tempering.
a) dealing
b) healing
c) annealing
d) milling
View Answer

Answer: c
Explanation: Annealing is the process of heating the steel to a sufficiently high temperature to relieve local internal stresses. It does not create a general softening of the product but only locally relieves strains and stresses locked up within the material. Annealing goes through three phases: recovery, recrystallization, and grain growth. The temperature required to anneal a particular steel depends on the type of annealing to be achieved and the alloying constituents.
advertisement

Answer: a
Explanation: There are two main types of ironwork: wrought iron and cast iron. While the use of iron dates as far back as 4000BC, it was the Hittites who first knew how to extract it and develop weapons. Use of iron was mainly utilitarian until the Middle Ages, it became widely used for decoration in the period between the 16th and 19th century.

Answer: d
Explanation: Anvils are as massive as they are practical, because the higher their inertia, the more efficiently they cause the energy of striking tools to be transferred to the work piece. On a quality anvil, the smith’s hammer should rebound with almost as much energy as the smith puts into the downward stroke, ultimately making the smith’s job easier and less physically strenuous.
Note: Join free Sanfoundry classes at Telegram or Youtube
advertisement
advertisement

4. The figure shown below represents which instrument? 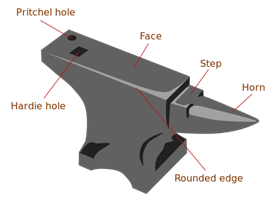 Answer: d
Explanation: The primary work surface of the anvil is known as the face. It is generally made of hardened steel and should be flat and smooth with rounded edges for most work. Any marks on the face will be transferred to the work. Also, sharp edges tend to cut into the metal being worked and may cause cracks to form in the workpiece. The face is hardened and tempered to resist the blows of the smith’s hammer, so the anvil face does not deform under repeated use. A hard anvil face also reduces the amount of force lost in each hammer blow. Hammers, tools, and work pieces of hardened steel should never directly strike the anvil face with full force, as they may damage it; this can result in chipping or deforming of the anvil face.

6. Which type of iron is presented by the following diagram?

Answer: d
Explanation: Iron (III) oxide or ferric oxide is the inorganic compound with the formula Fe2O3. It is one of the three main oxides of iron, the other two being iron (II) oxide (FeO), which is rare, and iron (II, III) oxide (Fe3O4), which also occurs naturally as the mineral magnetite. As the mineral known as hematite, Fe2O3 is the main source of iron for the steel industry.

Answer: c
Explanation: Varying the amount of carbon and many other alloying elements, as well as controlling their chemical and physical makeup in the final steel (either as solute elements, or as precipitated phases), slows the movement of those dislocations that make pure iron ductile, and thus controls and enhances its qualities.
advertisement

Answer: c
Explanation: With modern steelmaking techniques such as powder metal forming, it is possible to make very high-carbon (and other alloy material) steels, but such are not common. Cast iron is not malleable even when hot, but it can be formed by casting as it has a lower melting point than steel and good cast ability properties. Certain compositions of cast iron, while retaining the economies of melting and casting, can be heat treated after casting to make malleable iron or ductile iron objects.

9. What is the raw material which is not needed for steel production?
a) Paint
b) Ferro alloys
c) Water
d) Refractories
View Answer

Answer: a
Explanation: Steel is made when iron is combined with carbon and other elements like-
• Water
• Flux (Limestone and Dolomite)
• Refractories
• Silica or Sand
• Water
• Ferro alloys.
advertisement

10. Which is not a type of steel?
a) Low-speed Steel
b) Carbide Steel
c) Cobalt Steel
d) Stainless Steel
View Answer