1. ___________ are combination of more than two straight or curved scales aligned in a definite way so that when a straight line drawn across the scales intersects them at values satisfying the represented equation.
a) Hydrograph
b) Namographs
c) Nomographs
d) Hygrograph
View Answer

Answer: c
Explanation: A nomogram (from Greek νόμος nomos, “law” and γραμμή grammē, “line”), also called a nomograph, alignment chart or abaque, is a graphical calculating device, a two-dimensional diagram designed to allow the approximate graphical computation of a mathematical function. An arrangement of two linear or logarithmic scales such that an intersecting straight line enables an intermediate values or values on a third scale to be read off.

3. Which short of instrument is shown below? 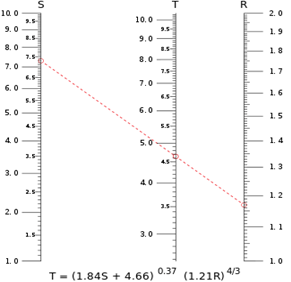 Answer: b
Explanation: The field of nomography was invented in 1884 by the French engineer Philbert Maurice d’Ocagne (1862-1938) and used extensively for many years to provide engineers with fast graphical calculations of complicated formulas to a practical precision. Nomograms use a parallel coordinate system invented by d’Ocagne rather than standard Cartesian coordinates.
A nomogram consists of a set of n scales, one for each variable in an equation. Knowing the values of n-1 variables, the value of the unknown variable can be found, or by fixing the values of some variables, the relationship between the unfixed ones can be studied. The result is obtained by laying a straightedge across the known values on the scales and reading the unknown value from where it crosses the scale for that variable. The virtual or drawn line created by the straightedge is called an index line or isopleth.
Note: Join free Sanfoundry classes at Telegram or Youtube
advertisement
advertisement

4. Which is not the application of nomography?
a) Ballistics calculations prior to fire control systems, where calculating time was critical
b) Operations Research, to obtain results in a variety of optimization problems
c) The design of channels, pipes and weirs for regulating the flow of water
d) In measuring water velocity
View Answer

6. This is a mathematical equation which expresses the relationship of a group of variables and constants.
a) Function
b) Functional modulus
c) Variables
d) Scales
View Answer

Answer: a
Explanation: In mathematics, a function is a relation between a set of inputs and a set of permissible outputs with the property that each input is related to exactly one output. An example is the function that relates each real number x to its square x2. The output of a function f corresponding to an input x is denoted by f(x) (read “f of x”). In this example, if the input is −3, then the output is 9, and we may write f(−3) = 9. Likewise, if the input is 3, then the output is also 9, and we may write f(3) = 9. (The same output may be produced by more than one input, but each input gives only one output.) The input variable(s) are sometimes referred to as the argument(s) of the function.

7. This is defined as the product of functional modulus and common constant coefficient of a function variable.
a) Modulus of elasticity
b) Function
c) Scale modulus
d) Functional modulus
View Answer

8. This is defined as the length of the scale for a unit value of the functional variable.
a) Functional modulus
b) Young’s modulus
c) Modulus of elasticity
d) Constant modulus
View Answer

Answer: a
Explanation: Mathematically, we can write as
m = L/(f(xmax)-f(xmin), where m is the functional modulus
L = scale length
xmax and xmin represent the value of the variable x corresponding to the maximum and minimum values of the function respectively.