Answer: b
Explanation: 3D projection is any method of mapping three-dimensional points to a two-dimensional plane. As most current methods for displaying graphical data are based on planar (pixel information from several bitplanes) two-dimensional media, the use of this type of projection is widespread, especially in computer graphics, engineering and drafting.

2. In perspective projection, all lines of sight start at a ________ point.
a) double
b) triple
c) multiple
d) single
View Answer

Answer: d
Explanation: When the human eye looks at a scene, objects in the distance appear smaller than objects close by. Orthographic projection ignores this effect to allow the creation of to-scale drawings for construction and engineering.
Orthographic projections are a small set of transforms often used to show profile, detail or precise measurements of a three dimensional object. Common names for orthographic projections include plane, cross-section, bird’s-eye, and elevation.

Answer: c
Explanation: Perspective (from Latin: perspicere “to see through”) in the graphic arts is an approximate representation, generally on a flat surface (such as paper), of an image as it is seen by the eye. The two most characteristic features of perspective are that objects are smaller as their distance from the observer increases; and that they are subject to foreshortening, meaning that an object’s dimensions along the line of sight are shorter than its dimensions across the line of sight.
Subscribe Now: Civil Engineering Drawing Newsletter | Important Subjects Newsletters

4. It is a point at which the eyes of the observer are located. S and S’ indicated respectively the TV and FV of S is _____________
a) station point
b) piercing point
c) exit point
d) vanishing point
View Answer

5. It is the line drawn through the station point and perpendicular to the picture plane. It is also called axis of vision or line of sight or __________
a) Station point
b) X-axis
c) Perpendicular axis
d) Z-axis
View Answer

Answer: c
Explanation: In a Cartesian coordinate system, the origin is the point where the axes of the system intersect. The origin divides each of these axes into two halves, a positive and a negative semi axis. Points can then be located with reference to the origin by giving their numerical coordinates—that is, the positions of their projections along each axis, either in the positive or negative direction. The coordinates of the origin are always all zero, for example (0,0) in two dimensions and (0,0,0) in three.
Become Top Ranker in Civil Engineering Drawing Now!

6. These are points at which the edges of the object appear to be converging. This point is seen at eye level, ie. on HP are __________
a) Station point
b) Piercing point
c) Exit point
d) Vanishing point
View Answer

Answer: b
Explanation: The resulting perception is also known as visual perception, eyesight, sight, or vision (adjectival form: visual, optical, or ocular). The various physiological components involved in vision are referred to collectively as the visual system, and are the focus of much research in linguistics, psychology, cognitive science, neuroscience, and molecular biology, collectively referred to as vision science.
advertisement

8. Which information is required to draw the perspective?
a) Top View and Front View (or Side View of) the object
b) Orientation and location of the object w.r.t the PPP
c) Location of station point S w.r.t to PPP and GL
d) Angle of projection
View Answer

Answer: d
Explanation: Top View and Front View (or Side View of) the object. Since the PPP lies between the observer and the object, third angle projection technique is used. Orientation and location of the object w.r.t the PPP. Location of station point S w.r.t to PPP and GL.
Normal practice for location of S is at the normal to the eye level for big objects like buildings and for small objects s is located at such a height that all the three dimensions of the objects are almost visible.

9. In the ___________ method, the points on the perspective are obtained by projecting the top view with either the front view or the side view of the visual rays.
a) vector
b) concurrent
c) visual ray
d) straight line
View Answer

Answer: c
Explanation: In the visual ray method, the points on the perspective are obtained by project ting the top view with either the front view or the side view of the visual rays. The method of drawing the perspective by visual ray method is illustrated by the problem below:
Problem
A hexagonal lamina of 45 mm edge lies on the ground. The corner which is nearest to PPP is 25 mm behind it and an edge containing that corner is making 50° to PP. The station point is 50 mm in front of PPP. 60 mm above Ground plane and lines in a central plane which is 80 mm to the left of the corner nearest to PPP. Draw the perspective view of the lamina by visual ray method.
Solution: The solution to the problem is illustrated in figure below:- 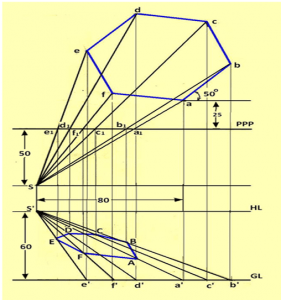 10. The figure below represents _______ of a rectangular prism with one face in PPP. 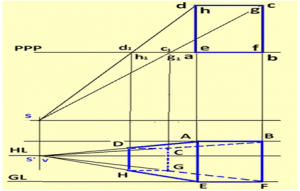 Answer: b
Explanation: Here one face of the object is kept parallel to and in the PPP as shown in figure 2. Since this face is in the PPP, the edges in the front view will be true dimensions. The edges perpendicular to this face appears to be converging to a VP. Draw visual rays from the station points to the object points in both TP and FV. Draw vertical projectors from the piercing points in the top view to meet the corresponding visual rays in the front view.