1. The front and top view are sometimes not sufficient to convey all the information regarding the object. Additional views are therefore projected on other planes known as ____________
a) auxiliary vertical plane
b) auxiliary inclined plane
c) auxiliary plane
d) horizontal and Vertical plane
View Answer

Answer: d
Explanation: The auxiliary views may also be used for determining – true length of a line, point-view of a line, edge- view of a line, true size and form of a plane etc as shown in the figure below.

Answer: a
Explanation: These are A.V.P (Auxiliary vertical plane) and A.I.P. (Auxiliary inclined plane). Auxiliary vertical plane is perpendicular to the H.P. and inclined to the V.P. projection on an A.V.P. is called auxiliary front plane. Auxiliary inclined plane is perpendicular to the V.P. and inclined to the H.P. projection on an A.I.P. is called auxiliary top view.
Note: Join free Sanfoundry classes at Telegram or Youtube
advertisement
advertisement

Answer: c
Explanation: A simple example of a pair of skew lines is the pair of lines through opposite edges of a regular tetrahedron. Two lines that both lie in the same plane must either cross each other or be parallel, so skew lines can exist only in three or more dimensions. Two lines are skew if and only if they are not coplanar. Referring the figure below, here the line through segment AD and the line through segment B1B are skew lines because they are not in the same plane. 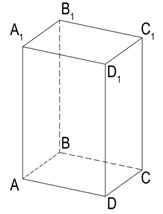 5. The shortest distance between two parallel lines is equal to the length of the perpendicular drawn between them. If its true length is to be measured, then the two given parallel lines should be shown in their _________ views.
a) top
b) front
c) point
d) line
View Answer 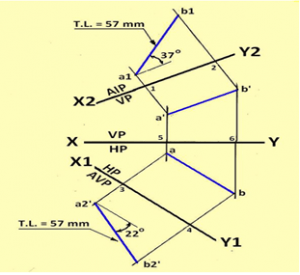 7. Plane appears as foreshortened surface in all the projection planes is known as _________
a) The parallel plane
b) The vertical plane
c) The slant plane
d) The horizontal plane
View Answer

Answer: c
Explanation: A slant plane is defined as a plane that appears as a line in at least one of the standard views of projection (top, front), and foreshortened in the other views. 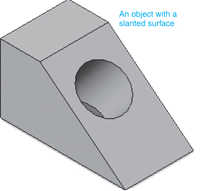 Answer: a
Explanation: If an auxiliary view is symmetrical, and if it is necessary to save space on the drawing or to save time, only half of the auxiliary view may be drawn, as shown below. In this case, half of a regular view is also shown since the bottom flange is also symmetrical as shown in the figure below. 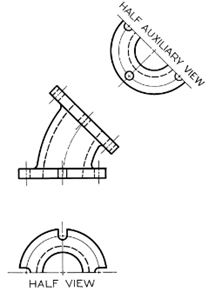 9. Planes which are inclined to both the reference planes are called __________
a) vertical planes
b) inclined planes
c) horizontal planes
d) oblique planes
View Answer

Answer: d
Explanation: Oblique projection is a simple type of technical drawing of graphical projection used for producing two-dimensional images of three-dimensional objects. The objects are not in perspective, so they do not correspond to any view of an object that can be obtained in practice, but the technique does yield somewhat convincing and useful images. The plane at which these activity occur refers to as Oblique planes.
advertisement

Answer: b
Explanation: Axonometric projection is a type of orthographic projection used for creating a pictorial drawing of an object, where the lines of sight are perpendicular to the plane of projection, and the object is rotated around one or more of its axes to reveal multiple sides.

Answer: b
Explanation: In dimetric projection, the direction of viewing is such that two of the three axes of space appear equally foreshortened, of which the attendant scale and angles of presentation are determined according to the angle of viewing; the scale of the third direction (vertical) is determined separately. Approximations are common in dimetric drawings.

Answer: d
Explanation: In both orthographic and oblique projection, parallel lines in space appear parallel on the projected image. Because of its simplicity, oblique projection is used exclusively for pictorial purposes rather than for formal, working drawings. In an oblique pictorial drawing, the displayed angles among the axes as well as the foreshortening factors (scale) are arbitrary. The distortion created thereby is usually attenuated by aligning one plane of the imaged object to be parallel with the plane of projection thereby creating a true shape, full-size image of the chosen plane.