Answer: a
Explanation: Arrowheads resembles the extent of dimensions. It should be sharply defined and uniform throughout the drawing. Generally, 3 mm in length is used. For such precision small diameter pencils are used, hence 2H is used as arrowheads.

2. Which type is the line A in the following figure? 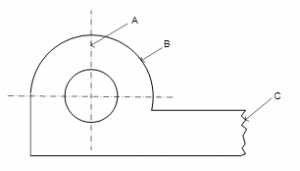 3. In n the following figure line C is used for irregular boundaries, what is its name?

Answer: c
Explanation: Short- break lines usually shortens an object that otherwise would be longer at a real world scale. These are continuous, thin, heavy, semi-parallel, wavy lines. They are drawn free hand for consistent shaped objects and are used to show short break or irregular boundaries.
Sanfoundry Certification Contest of the Month is Live. 100+ Subjects. Participate Now!
advertisement
advertisement

4. What type of line is B in the following figure?

Answer: b
Explanation: Outlines represents a general sketch indicating only the main features, aspect of something under discussion. These are continuous thick, wide lines used to represent visible edges and surface boundaries of objects. Also known as principal lines.

5. What does the “Single-Stroke” lettering mean?
a) Cursive writing
b) Uniformity in letters as obtained in one stroke of the pencil
c) Writing in one stroke without lifting the pencil
d) Writing only with hard, small diameter lead-pencil
View Answer

Answer: d
Explanation: These lines are drawn to make the section bold or visible. These are continuous thin lines and are generally drawn at an angle of 45 degree to the main outline of the section. This figure

shows hatching line (inclined lines), it can be any line.

7. What is the general application of the line shown below?

Answer: c
Explanation: Cutting plane lines represents a plane or planes in which a sectional view is taken. The arrow indicates the direction of cutting the section. Here the upper or front portion of the section will be visible (in the diagram above).
advertisement

Answer: a
Explanation: Inclined letters are Single-stroke letters which lean to the right making a slope of 75 degree with the horizontal as per the guidance of Indian Standards. Also known as Italic lettering. Not recommended for beginners until you have mastered in vertical lettering. Inclined and vertical lettering should never appear on the same drawing.

Answer: b
Explanation: This

arrow is called as closed filled arrow head as it is hatched and closed. Due to bold appearance and hence good visibility and uniform ratio makes it a good arrow for use.

11. Guidelines for dimensions at international level on a drawing is controlled by __________
a) Bureau of Indian Standards
b) Corporate drafting standards
c) ANSI
d) ISO
View Answer

Answer: c
Explanation: The above symbol is used for diameter of circles irrespective of the units. The diameter symbol ⌀ is distinct from the empty set symbol ∅, from an (italic) uppercase phi Φ, and from the Nordic vowel ∅.

» Next - Civil Engineering Drawing Questions and Answers – Scales
Next Steps: