Answer: b
Explanation: Lacking a tie beam, the arch-braced (arched brace) truss gives a more open look to the interior of the roof. A double arch braced truss has a second pair of arched braces lower down, from the rafter to a block or inner sill: This form is called a wagon, cradle, barrel or tunnel roof because of this cylindrical appearance.
advertisement

Answer: b
Explanation: The principal rafters are linked by a collar beam supported by a pair of arch braces, which stiffen the structure and help to transmit the weight of the roof down through the principal rafters to the supporting wall.
Sanfoundry Certification Contest of the Month is Live. 100+ Subjects. Participate Now!
advertisement
advertisement

Answer: d
Explanation: Just like you can see from many roof truss types pictures, the Fan Truss comes with a very simple design and it’s made out of steel. In this particular situation, the trusses form a fink roof truss. On top of that, the main characteristic here is that the top chords are split into smaller lengths, as this allows the build to obtain purlin support. Also, you get a medium span with this type, around 10-15m, which is more than enough for most projects.
Check this: Civil Engineering Books | Civil Engineering MCQs
advertisement 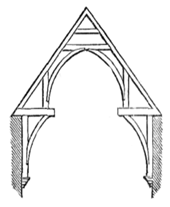 Answer: a
Explanation: This is one of the most efficient types of timber roof trusses, mostly because it brings a very good room for insulation, but at the same time it also provides you with a very good system for structural support. It might require some additional materials in order to make it bring the best results, not to mention that the costs can be a little higher when compared to other truss types, but it does help you lower the energy bill value, so keep that in mind.